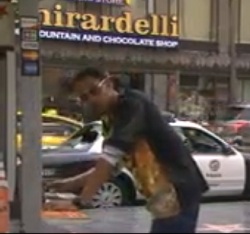 HOLLYWOOD — A man who broke the windows of an LAPD patrol car was charged by the Los Angeles District Attorney’s Office on February 13.

Leyston Rice, 27, was charged with felony counts of vandalism, burglary from a vehicle and grand theft, according to a news release from the District Attorney. Rice pleaded not guilty to all counts.

The incident in question occurred on February 11 in front of the Hollywood & Highland Center, when a KTLA photographer captured Rice breaking into the parked patrol car using metal construction stakes to do so. According to KTLA, Rice yelled, “I love Jesus Christ!”Â before subsequently breaking five of the vehicle’s windows. He then proceeded to grab a laptop from the car, which was when the photographer dialed 911.

Security personnel at the shopping center managed to detain Rice until LAPD officers arrived to arrest the suspect. He was then identified on February 12. The damage done to the vehicle was estimated to be around $2,600.

Rice is being held on a $20,000 bail, and is due back in court on February 26. He faces up to three years in jail if he is convicted on all counts.

Tou Thao, Ex-Officer Charged With Aiding and Abetting The Murder of...