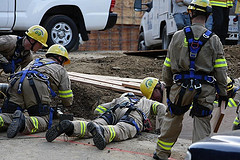 STUDIO CITY—On February 8, at approximately 2:51 p.m., firefighters responded to a call regarding a trench collapse on the 3900 block of North Oeste Avenue in Studio City. Upon arrival, fire crews found an adult male, unconscious and non-breathing “buried to his neck deep within an excavation for a sewer line at a hillside residential construction site.”

Officials claim the individual, identified by the coroner’s office only as a 33-year-old Hispanic male, had been last seen working in the 8-foot deep by 2-foot wide trench. The foreman of the private construction firm, who had reportedly left to run errands, returned to find the victim.

Rescue teams arrived at the scene with trench rescue equipment including a trio of vacuum trucks to assist with soil removal. Medical oxygen and breathing air lines were quickly prepared.

However, the efforts were too late. According to officials, “As the soil was promptly shored to protect both the patient and responders, USAR certified LAFD Paramedics were soon face-to-face with the trapped worker, to sadly determine with great certainty that he was beyond medical help.” The man was pronounced dead at 3:10 p.m. Witnesses claim he had worked for the company for 10 years.

The coroner’s office stated because the family of the deceased has not yet been notified, the name of the individual will not be released at this time. The victim’s father is believed to reside in Mexico.

The cause of death is yet to be determined.

The incident is being investigated by Cal/OSHA.