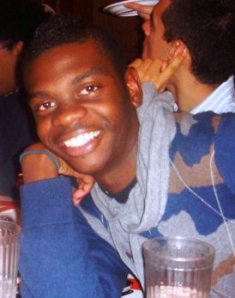 HOLLYWOOD—A 22-year-old man was run over and injured by a party bus in Hollywood on Saturday, March 12, on the corner of McCadden Place and Yucca Street.

Namar Burton of Murrieta was a passenger on the party bus, which was transporting locals around town to different night clubs. He was trying to catch up with the bus as it headed south on Yucca Street, but when it turned east on McCadden Place, Burton may have lost his footing and was caught under the wheels of the bus. He was hit at 11:25 p.m.

Following the accident, he was treated by firefighters and transported to Cedars-Sinai Medical Center where he was listed in grave condition.

Burton is a former student of California State University, Northridge. On March 22, 2010, Burton participated in the student march against cuts to higher education in West Sacramento. The protest was sponsored by student groups including the California State Student Association. Along with classmates, he rallied from Raley Field and walked to the Capitol.

Burton fills his Facebook page with positive thoughts such as a quotation from Thom Yorke, which states, “A lot of people think they’re happy, and then they live these boring lives and do the same things every day. But one day they wake up and realize that they haven’t lived yet. I’d much rather celebrate the highs and lows of everyday life than try to ignore them.”

He also proclaims the belief that “the best we can do is live our lives with enlightened improvisation—to be so self-aware and fearless that we can live fully in the present and redeem our every moment and every human connection,” quoted from the Jeff Jensen Review of the Series Finale of the ABC show “Lost.”

Finally, Burton shares his own take on life, stating in his profile that he’s “tryna make this thing called LIFE count… Get wit it or fall back [sic].”

Olivia Patrick, a close friend and classmate of Burton, informed Canyon News that “Namar is doing much better. He is recovering.”

In addition, Ross Bagley, 22, also a classmate of Burton, told Canyon News that, while he doesn’t know Burton all that well, he bonded with him over a shared  “mutual friend Ashaley K. Fraizer who passed away about a year and a half ago.”

Bagley said Burton “was a pretty cool dude… he had a great sense of humor and loved to laugh and make others laugh.”

Burton remains in the hospital, and the incident is still under investigation.

Anyone with information about this incident is asked to contact West Traffic Division Detectives at 213-473-0234. During non-business hours or on weekends, calls should be directed to 1-877-LAPD-24-7.  Anyone wishing to remain anonymous should call Crimestoppers at 1-800-222-TIPS (800-222-8477). Tipsters may also contact Crimestoppers by texting to phone number 274637 (C-R-I-M-E-S on most keypads) with a cell phone.  All text messages should begin with the letters “LAPD.”  Tipsters may also go to LAPDOnline.org, click on “webtips” and follow the prompts.