CALIFORNIA—Congresswoman Maxine Waters of California made comments for the homeless in her district to go home and later asked a Los Angeles Times reporter not to cover the story.

“I want everybody to go home,” Waters stated. The homeless burst out laughing, and shouting, “We ain’t got no home,” and “That’s why we’re here.”

“You’ll hurt yourself and the community trying to put this together without background. I don’t want you to start trying to write it, you won’t understand it,” Waters told the reporter.

The Los Angeles group Fathers and Mothers Who Care (FMWC) aids the homeless in getting crisis housing, interim housing, and permanent housing. A program called, “Empower Showers,” is scheduled on Tuesdays at 11 a.m. to offer the homeless access to a shower, clean clothes, a meal, and water. According to their website, this is an organization that runs on donations and is operated by volunteers. 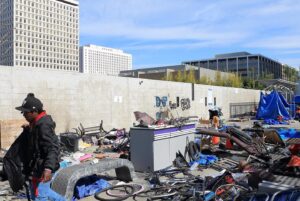 Weekly assistance is provided at 10420 S. Vermont Avenue. It is not clear who posted the message about the vouchers on social media. FMWC may have received assistance.

Republican Joe Collins is running to unseat Waters. Collins reported that Waters, 83, has been in office for decades. She does not reside in the 43rd District. She lives in a mansion outside her district.

According to a February 2022 report by USA By #s, Los Angeles has the fourth highest homeless rate in the country. Santa Cruz-Watsonville is number one. Salinas is second, while Santa Maria-Santa Barbara is third place.