According to The National Park Service, P-99 is a 2-3-year-old female weighing in at 75 pounds upon her capture. She has been fitted for the GPS radio collar and studied by the biologists in the study and track program. Their goal is to monitor threatened and fragile mountain lions. There are reportedly 13 mountain lions currently being monitored by the National Park Service, not including the kittens.

The non-profit humane organization, the Predator Healing Project reports that P-22, who garnered a lot of attention in the past has made his home, “In the center of LA in Griffith Park,” and called P-99, “Just as gorgeous, and we hope she is able to fend for herself in this environment.”

P-99 is one of the mountain lions to be relocated to Caltrans’ Wildlife Crossing located across from Ventura Freeway/State Route 101. It is a wildlife reserve of sorts that is surrounded by California’s freeways.

Mountain lions are felines that also have been referred to as cougars, puma, panthers, and catamount. The cubs or kittens (kits) as they are sometimes called stay with their mothers for at least the first couple of years of life. They reach their breeding age at approximately 2-3 years old. The average size litter is anywhere from 1-6 cubs. 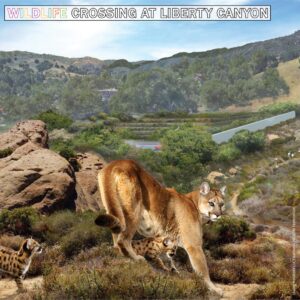 The puma is difficult to spot in its natural habitat. The tell-tale sign that one is near would be the presence of the “scat,” or feces.

According to the Mountain Lion Foundation, the average cougar may run up to 50 mph, is capable of climbing a 12 foot fence, bound 40 feet while running, and leap 15 feet up a tree.

Catamount prey upon elk, deer, raccoons, rabbits, along with other small animals including the armadillo and porcupines.

To view additional photos of mountain lions and their cubs visit the the National Park Service website at nps.gov and select Puma Profiles.