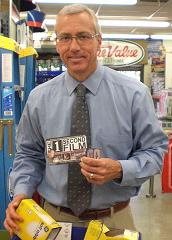 Charles William Pearson, who had previously pled not guilty on March 5 to one count of stalking and five counts of criminal threats, is accused of sending threatening e-mails to Pinsky. Pearson’s attorney reportedly questioned his client’s mental competency at a hearing in Pasadena Superior Court.

Pearson was taken in custody on March 3 at Pierce College in Woodland Hills. Believed to be a possible transient, 33-year-old Pearson had attempted to sue Pinsky in a Los Angeles Superior Court in February only weeks before he was arrested. A judge later dismissed the hearing after both Pearson and Pinsky failed to show up.

Pearson had reportedly attempted to collect $2,500, claiming that Pinsky had performed an illegal operation on him in the form of a microchip called a GED being inserted into Pearson’s genitals that would “hit” him throughout the day and cause his legs to burn. Pearson also accused UCLA’s Olive View Hospital, USC, and the Massachusetts Institute of Technology of being involved in the illegal surgery.

Pearson is scheduled to return to court on April 19.

Pinsky has hosted the radio talk show “Loveline,” since 1984, and produces and stars in the television shows “Celebrity Rehab” with “Sex Rehab with Dr. Drew,” “Sober House” and MTV’s “Sex With Mom and Dad.”  He has also made appearances on “Space Ghost Coast to Coast,” “The Adam Carolla Project,” “Minoriteam” and “Robot Chicken.”