HOLLYWOOD HILLS—On February 7, the California Supreme Court refused an appeal for a parole hearing of the Murderess of the Manson cult, Leslie Van Houten. Her parole has been denied twice by Governor Gavin Newsom and twice before by Governor Jerry Brown. In 2020, Van Houten was recommended for parole citing that she reportedly showed remorse for her crimes and was not a threat to society.

Van Houten is serving a life sentence for the murders of Leno Labianca and his wife, Rosemary Labianca that transpired in 1969.

On August 9, 1969 in Beverly Hills, Sharon Tate and her unborn child, Jay Sebring, Abigail Folger, Steven Parent, and Wojciech Frykowski were murdered by members of the Manson family under the direction of Charles Manson and Tex Watson. The word “PIG” was written in blood on the wall where the slain bodies were found.

After exiting the home, Manson and Watson instructed Leslie and Krenwinkel, who was waiting in the car, to go in and kill the couple. 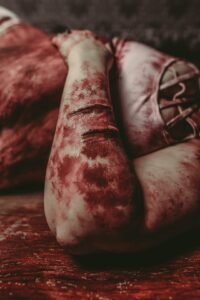 “Don’t stab me anymore,” Leno pleaded. He could be heard saying, “I’m dead, I’m dead.” Rosemary was still alive pleading for her life while being stabbed with knives and kitchen utensils taken from the kitchen. Rosemary told them to take whatever they wanted and promised not to call the police.

In 1971, Van Houten testified in court she panicked and held Rosemary down, while Krenwinkel stabbed her in the neck. “I stabbed Mrs. Labianca in the Torso,” Van Houten stated. “I knew I had to do something.” Rosemary was stabbed 41 times.

“I guess I put “WAR” on the man’s chest, and then she admitted to stabbing him with a fork in the stomach. She then wrote,”Death to Pigs,” in the victim’s blood on the walls.

Van Houten was 19 at the time of the crimes. The bodies of the Labianca’s were found by their children the next day.

On January 31, Governor Newsom, announced his intent to close the death row at San Quentin (SQ).  Inmates would be sent to other California prisons where they may begin a rehabilitation process.

Van Houten will not be granted a reprieve. Her defense team argued she has been denied “due process.” Governor Newsom reversed the decision of the parole board, noting that she posed an “unreasonable danger.”