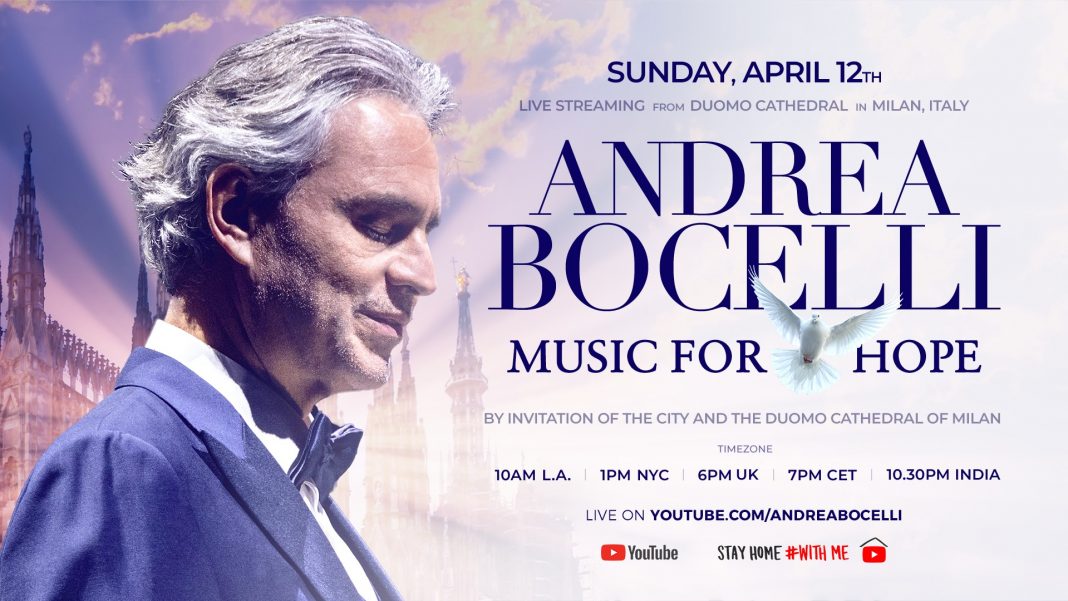 HOLLYWOOD—In times of crisis, you can always count on the Italians. Italy has been hit very hard and yet are together in spirit. The Italian tenor Andrea Bocelli has encouraged people to “not be afraid” of Coronavirus, as he prepares to sing in an empty Duomo di Milano on Easter Sunday.

Bocelli, 61, has been dealing with the lockdown, however, he had an idea to lift the spirits of people all over the world. According to published reports, he said, “During moments like this, as we are forced to stay at home, we have to grasp the opportunity to do things that often we would like to do, but which we don’t have time for,” he said.

“Let’s begin: speak to your children, and try with all your strength to create a family harmony that often is not there because dialogue is missing.” He added: “Read, listen to music, try to keep the body and mind very active and, last but not least, do not be afraid of a virus that will pass, in the same way that you wouldn’t be afraid when you get behind the wheel of your car, knowing that throughout the year there are so many road victims.”

Milan’s cathedral is closed under the lockdown, but will open its doors on Sunday to Bocelli and the organist Emanuele Vianelli, who will play one of the world’s largest pipe organs. The event begins at 7 p.m. local time (1800 BST) and will be streamed live on YouTube. The repertoire of songs will include Ave Maria (Bach/Gounod) and Pietro Mascagni’s Sancta Maria. The concert is being hosted by the Milan authorities and the Veneranda Fabbrica del Duomo, which supervises the cathedral.

“This year, Easter will be very different for all of us,” said Beppe Sala, the Mayor of Milan, in a statement. “The joyous serenity that usually comes with this day has been greatly troubled by the pandemic that we’re experiencing. I am sure that the extraordinary voice of Bocelli will be the embrace we are missing these days, a strong, special hug capable of warming the heart of Milan, Italy and the world.”

Bocelli has been raising funds through his Andrea Bocelli Foundation (ABF) for hospitals and protective equipment during the pandemic, which has so far killed 17,127 people in Italy. The foundation set up a GoFundMe page and within a few days collected over $100,000 to purchase medical equipment for a hospital in Camerino, in the Marche region of central-eastern Italy, where the foundation had already been reconstructing schools destroyed in an earthquake in 2016.

Since it was established in 2011, the foundation has raised millions for projects around the world. “For me, ABF is an important opportunity to do important things which alone I wouldn’t be able to do,” said Bocelli. “I often say, ‘You can do many things alone, but with many others you can do much more.’ Therefore, the scope of ABF is to gather even more resources, involving around 70 people who with goodwill together raise funds, but also ideas, desires and dreams.”

Bocelli will also join a lineup of celebrities including Elton John, Chris Martin of Coldplay, Paul McCartney and Lady Gaga for “One World: Together at Home,” a live-streamed and televised benefit concert in support of the World Health Organization’s COVID-19 solidarity response fund and in celebration of health workers around the world. Curated by Lady Gaga, the event will be broadcast live on the TV networks ABC, CBS and NBC, as well as being streamed online, from 8 p.m. EST on April 18.

Last week, Bocelli performed Con te partirò (Time to Say Goodbye) from his home for James Corden’s “The Late Late Show.” In the past, the tenor has given impromptu performances, including walking into a church in Porto Venere, Liguria, in 2015 and surprising a just-married couple with a rendition of Ave Maria. There have been 135,586 cases of Coronavirus in Italy to date, and the growth rate for new infections has been slowing. Italy’s lockdown is in place until at least April 13 and will probably be extended.

Rose’s Scoop: Since we are all banned from going to church, please lets listen to Andrea Bocelli, a wonderful human being with an incredible voice. May all of you stay safe. We can beat this. I know I’m trying to get over this, since I was exposed by someone who had tested positive, yet neglected to inform me. Happy Easter everyone!