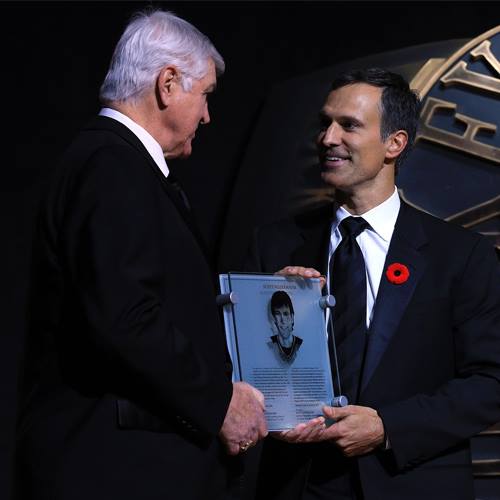 TORONTO—The Anaheim Ducks made history at the 2013 Hockey Hall of Fame induction ceremony on Monday, November 11. Scott Niedermayer, who played with the Ducks for five seasons became the first player in the franchise to be inducted in the Hall of Fame.

In his speech, Neidermayer spoke of his childhood aspirations eventually leading to the precursor to his NHL start in a message to coach Tom Renney, “Thank you for an important part of my development as a hockey player and leading us (the Kamloops Blazers) to a Memorial Cup in 1992.” During his time in the Western Hockey League, New Jersey GM Lou Lamoriello drafted Neidermayer in 1991 into the NHL.

Neidermayer’s NHL career started with the New Jersey Devils, and he became a force to be reckoned with. In his first season as defenseman, he scored 11 goals and 29 assists. It wouldn’t take him more than three seasons to experience what most players dream of when his team hoisted the Stanley Cup in 1995 sweeping the Detroit Red Wings 4-0 under head coach Jacques Lemaire. He would win two more Stanley Cups under Larry Robinson and Pat Burns where he faced his brother Rob and the Ducks. He also thanked all his teammates he got to know over the 12 seasons he played.

He made a sentimental decision to leave New Jersey in order to join the Anaheim Mighty Ducks and his brother. “We started hockey together and were teammates every year growing up,” said Scott. “As tough as it was shaking hands after the 2003 Stanley Cup final, it made passing you the cup in 2007 more memorable.” He went on to thank the key members of the Ducks franchise including Coach Randy Carlyle who lead them to the cup. After 18 seasons, Neidermayer’s career spans with 172 goals, 568 assists, and 740 points spanning 1,263 career games. Aside from his professional career, Neidermayer made a major contribution to the Canadian Men’s hockey team winning gold medals at the World Juniors in 1991 and the Winter Olympics in 2002 and 2010.

Neidermayer had been the face of the Ducks for a short period, but his impact on the organization in winning a Stanley Cup and concluding an enlightening career sets a mark that will never be erased in the eyes of Ducks hockey fans.