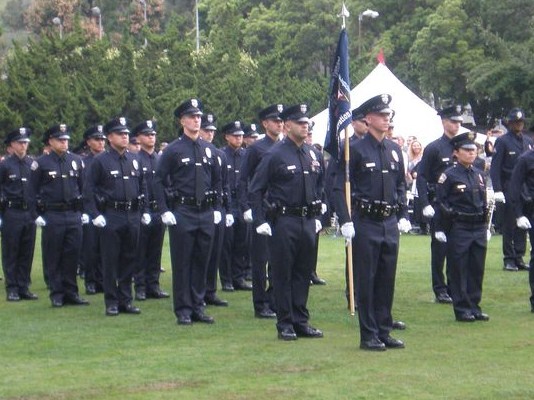 LOS ANGELES—In celebration of the new year, the thirty-six cadets of class 8-11 marched across the academy field on January 27 to become the newly appointed officers for the Los Angeles Police Department.

Chief Charlie Beck expressed his gratitude towards friends and family members for their undying support of the officers while they trained for the toughest moment in their lives. “Thank you for what you have done. These officers are here because of you, they are here  because you raised them, you befriend them, you encouraged them and you mentored them into the people they are today,” said Beck.

He next addressed the graduating officers on how much they mean to him and the department. “What you do for the rest of your careers will influence how the public will view the department,” said Beck.

He leaves the officers with a moral lesson in “Character,” letting them know that if they don’t have character, they don’t have anything. Character is one of the most important characteristics needed to become an officer for the Los Angeles Police Department. This is something Chief Beck feels strongly about and wants the new officers to stand on that very same principle.

“You are more than just police officers,” added Beck. “You are the elite, the glue, the glue that bonds society,” said Beck. He also spoke on his time spent as an officer as well as the time his father and family members spent on the force.

Chief Beck went on to tell the officers how important their roles are in the community and how they should take that with pride. The way the officers act within their profession will be the factor that will allow them to progress in their careers. He also told them that they will grow but grow into the individuals that will allow them to go far in the Los Angeles Police Department.