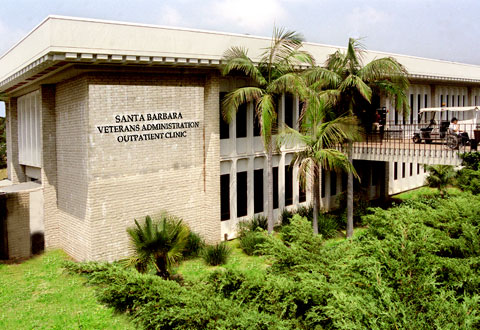 WESTWOOD—On February 10, an unknown odor caused numerous people to evacuate from a building next to the Veterans Affairs Medical Center on the 11300 block of West Wilshire Boulevard.

The smell was noted at about 9:25 a.m., on the third floor of the building on site at the Veterans Administration center in Westwood, according to Los Angeles Fire Department.

The problem was investigated by a hazardous materials team, a procedure reportedly continued for more than an hour-and-a-half.

Devin Gales, of the Los Angeles Fire Department, told Canyon News that the source of the odor is unknown.  No further information regarding the status of the investigation is immediately available.

The Los Angeles Fire Department announces the arrival of Wilshire the Fire Dog at http://www.wilshirethefiredog.org/. Friends of Wilshire Foundation is a certified nonprofit, charitable organization to support Wilshire the dog’s fire safety and health programs for children.

Wilshire was taken to a fire station as a pup by a 10-year-old girl, and was adopted by the firefighters when no permanent home could be found for the young Dalmation. He was named Wilshire after the busy street they lived on, and Wilshire adjusted quickly to life as a firefighter, and by teaching children of all ages about fire safety.

To help learn about how to help Wilshire’s programs, contact Jan Graff at jan@wilshirethefiredog.orgor 714-315-0993.