PASADENA—The No. 6 Ohio State Buckeyes dedicated the 105th Rose Bowl presented by Northwestern Mutual to their retiring head coach Urban Meyer. The legendary head coach turned ‘The Granddaddy Of Them All’ into his swan song, as the Buckeyes defeated the No. 9 Washington Huskies, 28-23, on New Year’s Day at the iconic Rose Bowl. Ohio State finishes the season at (13-1).

“On behalf of our players and the Big Ten Conference and Ohio State University, I want to thank the Rose Bowl. This has always been a bucket list. It’s something I’ve dreamed about as long as I’ve been watching Ohio State football, which is as long as I’ve been around. And it was everything and more. So thank you to the Rose Bowl people.” Its Meyer’s first appearance and victory in the Rose Bowl. New Year’s Day is poignant for the Scarlet and Gray, as a new chapter begins.

Ironically, the Buckeyes fans sitting in the stands were more likely watching Quarterback Dwayne Haskins final performance. The sophomore is sending strong signals he will enter the NFL Draft. Haskins is projected as the top QB in the draft, sixth overall.

Ohio State drew first blood when Heisman Trophy finalist, Dwayne Haskins threw a dart down the middle of the field to a wide open Parris Campbell standing alone in the end zone. Haskins was brilliant, going 25 for 37,271 yards and throwing 3 touchdown passes. Haskins cut through the Huskies defense like a surgeon, his patience in the pocket to go alongside pinpoint accuracy torched the Huskies D. 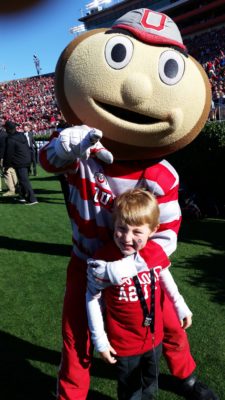 Washington possessed the 12th ranked defense in the nation, yet it was unable to put any pressure on Haskins or force any turnovers. The Buckeyes simply had too many weapons on this afternoon.

Washington’s offense in the first half was colder than the frigid Rose Bowl. UW didn’t score its first touchdown until Running Back Myles Gaskin hit tight-end Drew Sample with a 2-yard Tebowesque jump pass on fourth down with 12 minutes, 17 seconds to play. Gaskin ran for 101 yards on 24 carries.

That made it 28-10 and started a wild finish. Senior Quarterback Jake Browning was inconsistent, his confidence and play improved dramatically in the second half. “The energy just kind of increased on both sides of the ball when the defense was just … getting those stops,” said wide receiver Andre Baccellia, who had a game-high 12 receptions for 109 yards.

The Huskies mounted a furious comeback in the fourth quarter. Trailing 28-3 in the second half, the Huskies came to life scoring 20 straight points down the stretch. A Gaskin 2-yard TD run trimmed the deficit to five in the closing seconds. With 42 seconds remaining, the Huskies attempted an onside kick which OSU recovered.  Sealing the victory in the process.