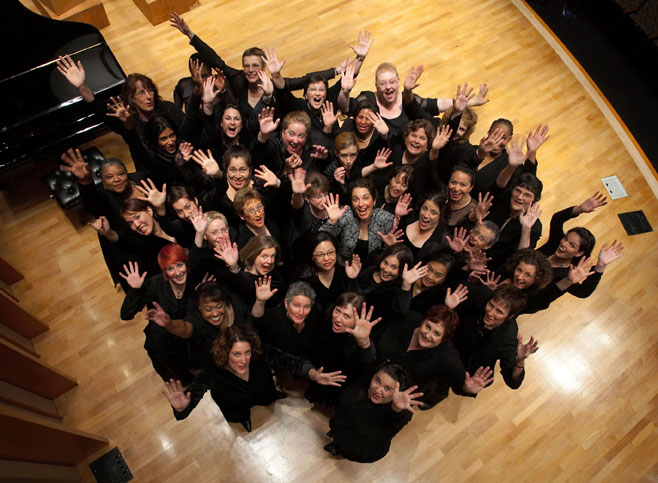 HOLLYWOOD —Vox Femina Los Angeles, is a women’s choral ensemble dedicated to the performance of quality choral literature with an emphasis on music by women composers. Choral singing is one of the oldest performance arts in existence, but Vox is excited to perform new works and accept new challenges for themselves and for the audience. Dr. Iris S. Levine founded Vox in 1997. In the past 12 years, Vox has established itself as one of the preeminent women’s choruses in the United States with a demonstrated ability to perform highly eclectic repertoire, some of which can be heard on several recordings. It has actively fulfilled its goals through an exciting schedule of performances, touring and educational outreach. Vox Los Angeles is funded through grants and private donations.

Join “Sister My Sister” for it’s a one-night only performance. voxfeminala.org/season.htm

WHAT/WHO: Vox celebrates the depth, beauty and strength of our community of women in a concert. The history of women, always in sisterhood, through many struggles and joys, is reflected in music. Sister, My Sister explores women’s history and music by linking our audience to the generations of women who’ve gone triumphantly before us. Starting as far back as the middle ages with Hildegard von Bingen, and moving through the centuries, we’ll hear from Clara Shuman, Sojournor Truth, Maya Angelou and Cris Williamson. The highlight of the concert will be a newly commissioned work entitled “Healy Madrigals” by Roger Bourland featuring the poignant musings of Los Angeles based poet Eloise Klein Healy. Repertoire will also include the music of Faustina Hasse Hodges, Beethoven, Coco’s Lunch, Ysaye Barnwell, Rosephanye Powell and others. The audience will feel the strength of the women’s community and Vox will truly “give women voice.”

Check out an audio sample of the talented group at http://www.voxfeminala.org/mp3/Still_I_Rise.mp3