PORTLAND, OR—On Sunday, July 19, protesters became violent starting riots in front of the federal courthouse as their plea to end racial injustice and police brutality continued. It has been an on-going battle between police officers and rioters for over the 50th night in a row in Portland, Oregon.

The stand-off lasted for hours as protesters held signs with the peace symbol and signs that read, “White Silence Violence” while yelling for federal agents to “Go Home.” Fires were started, as well as tampering of security cameras outside the justice center.

Protesters broke down fences, placed graffiti on the walls of the building and when they  got the fences down, they met officers with hockey sticks and other weapons. When protesters did not disperse, officers set off tear gas and shot rubber bullets to simmer down the crowds. 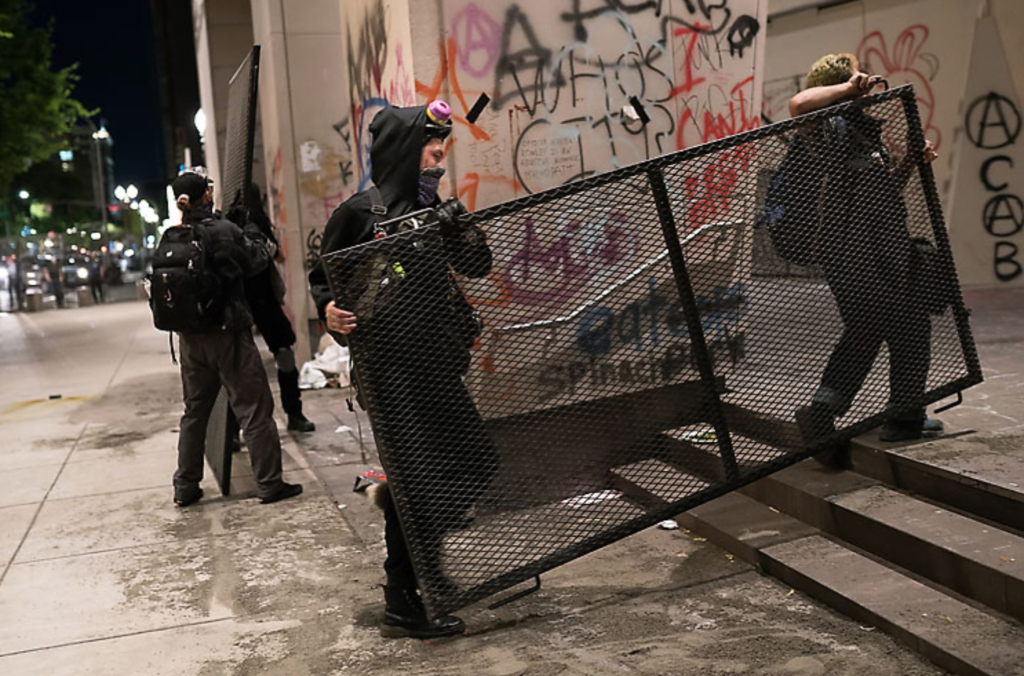 Graffiti covered the city the following morning. A couple of phrases read: “FEDS GO HOME,” and “Everything had Changed!” with the A in “had” being the anarchy symbol. Local businesses were vandalized and windows were shattered at multiple local places like, Chipotle and H&B Jewelry & Loans on Southwest 3rd Avenue.

Mayor Ted Wheeler stayed quiet during the chaos stating his opposition to the Trump administration’s decision to bring in federal officers. He tweeted, “We didn’t ask for these troops in our cities. We don’t want these troops in our cities.” He said during a recent interview, “things were calming down” before the threat of police force. President Trump tweeted “we are trying to help Portland, not hurt it.” Wheeler sees it as, “an attack on democracy.”

Oregon’s Attorney General, Ellen Rosenblum said in an interview on Tuesday, July 21 with CNN that she will be suing The United States Department of Homeland Security. She believes that federal agencies are violating First Amendment rights and the right of peaceful protesters to fight police brutality. “The people of Oregon are being harmed,” said Rosenblum, regardless of officers confirming that they were the target of beer cans, rocks and frozen water bottles while doing their job to protect the community.

Portland Fire & Rescue posted the following statement on their website: “PF&R would like to make it very clear that federal agents were not, and will not ever, be allowed to use fire stations for their tactical operations.” Historically, they have been allowed to, but under the rule of Fire Commissioner Jo Anne Hardesty, the rule changed.

Officer Jakhary Jackson of the Portland Police Bureau took a stand to give a summary of his experience with protesters and how they have impacted African American officers.

“The fight against racism” has brought out racism in some cases that officer Jackson attested to stating, “Protesters at a BLM protest were yelling, ‘you have the biggest nose I’ve ever seen.” They also demanded that he, ‘quit his job.” He confirmed that, one of the first businesses looted was a black-owned business. People behind a movement that “supports” black lives has triggered some African Americans to leave marches because they were “turning into something else.”

Acknowledging that racist cops exist, Jackson said he does not associate with them and neither do his coworkers. He said, “They make us all look bad.” He went on to say, “I’ve been called the n-word on calls, I can’t even count and having white officers jump in and defend me… (hearing it) and them being absolutely shocked.”

Government leaders have been blamed by locals who don’t feel safe being in their home town these days, but Mayor Wheeler and Attorney General Rosenblum think that the Trump administration is to blame. Protesting continues in Portland.