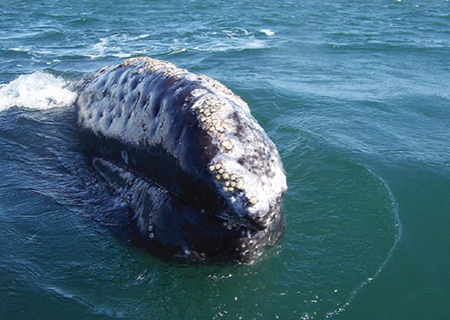 MALIBU—On January 16, the Los Angeles Chapter of the American Cetacean Society reported a new influx of Pacific gray whales spotted in the Southern California waters during their annual migratory journey.

The whale-watching study is part of the Gray Whale Census and Behavior Project, a unique program that has been operated yearly by volunteers from the American Cetacean Society, the Cabrillo Whalewatch Program and the general public for more than three decades.

Sponsored by A.C.S./L.A., the long-term study— reported to be the world’s longest-running — is staffed by trained observers who use binoculars and spotting scopes to document the number of gray whales, calves and other signs of marine mammal life passing through the near-shore waters of the Palos Verdes Peninsula, eight miles north of the Los Angeles Harbor. The project operates daily from the Point Vicente Interpretive Center, (P.V.I.C.), from December 1 to May 15 during daylight hours.

A.C.S./L.A. reports that the number of gray whales spotted during their migratory route from Alaska to Baja, Mexico has reached 191 in December, 2011 and 197 in January, 2012, which is in stark contrast to the 26 recorded in December, 2010.  According to the California Gray Whale Coalition, the whales travel approximately 100 miles past the Malibu shoreline via their path.

The project has been executed yearly from Long Point or Point Vicente since 1979, (save for the years 1981-1982 and 1982-1983) and has been provided the patio of the P.V.I.C. as the main site for the project since 1985-1986; yet, other affiliated centers have also participated in the study from the Santa Catalina Island and Santa Cruz Island.  Volunteers record the migratory patterns and behaviors of marine mammals, particularly of adult and juvenile gray whalesfrom their vantage of about 125 of sea level.  Documented behaviors of these animals include breaching, spy hopping, rolling, courtship, possible nursing and feeding and interaction with kelp and other marine mammals.

Additionally, volunteers track possible human-related instances in which gray whales may be affected, including boat interactions, apparent entanglements and harassment.

The Malibu Pier Sport Fishing Pier announces at its website that whale watching tours will be cancelled indefinitely as the venue undergoes repairs to damages caused by a large swell that recently affected it and the surrounding area.

Residents are informed that the repairs may not be completed in time for the 2011-2012 whale-watching season, but are advised to periodically check for updates on possible boat trips that may take place later in the year.