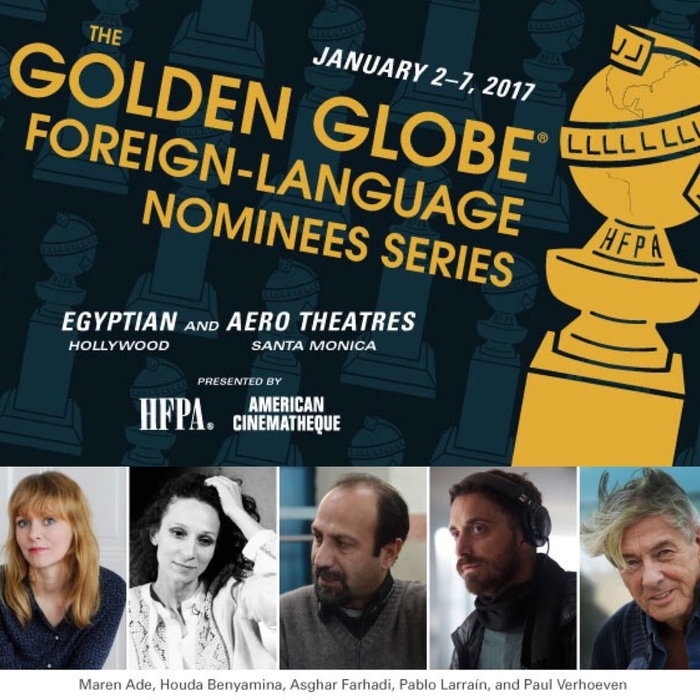 HOLLYWOOD—On Saturday, January 7, a panel discussion was held at the Egyptian Theater to unwrap and celebrate the five nominated films for the Golden Globes’ Foreign-Language category which will be handed out on Sunday, January 8.

The five movies up for the award include “Toni Erdmann,” “Neruda,” “Elle,” “The Salesman,” and “Divines.” All five directors attended the event, which was co-presented by the Hollywood Foreign Press and the American Cinematheque.

“Toni Erdmann” tells the story of a father who attempts to revive his relationship with his daughter by using practical jokes and peculiar personas to wedge himself into her world, incorporating false teeth amongst other disguises and posing as a life coach. The German dramedy was praised for the complex and well-formed relationship between father and daughter. The film which was written, directed, and co-produced by Maren Ade, was praised for its comedic elements, despite Ade claiming to have originally intended it to be a drama. During the panel, Ade revealed that she had attained a set of false teeth years ago when attending an Austin Powers premiere. She later gave the teeth to her own father, who put them on and smiled at fellow drivers when stopped at traffic lights. This was one of the sources of inspiration for the father character, Toni.

Pablo Larraín’s Chilean-produced film “Neruda” focuses on the celebrated and famous poet/politician Pablo Neruda. The story narrows on Neruda’s exile from Chile after criticizing President Gabriel González Videla for his brutal attempts at snuffing out communism. Larraín stated in the discussion that he had been a big fan of Gael García Bernal throughout film school, and through shared views and interests became good friends with the actor, which lead to eventually casting him as one of the film’s lead characters.

The French psychological thriller “Elle,” tells the story of a woman being raped by an unknown assailant and the hunt and revenge she exacts on him. The script was based on the novel “Oh…” by Philippe Djian. Isabelle Huppert was highly praised for her portrayal of Michèle Leblanc, whose complex character bridged and blurred the lines of consent, revenge, and attraction. Director Paul Verhoeven presented his topic-choice process as one that neither encourages nor suppresses his inclinations toward sensitive and provocative subject-matter. He simply executes stories that interest and inspire him, despite any consequences.

“The Salesman” is an Iranian-French drama written and directed by Asghar Farhadi, centered on a married couple, where the husband grapples with his need for revenge against the man who attacked his wife in the apartment they had recently moved into. At one point, the panel moderator Sam Asi asks for Farhadi’s opinion on how he thinks crimes such as rape should be dealt with according to the film, as well as the distinction between justice and revenge. Farhadi responded by saying that the time for answering questions for audiences in cinema is over. He expressed his aim was to merely present many angles to an ongoing argument that society has been having for a long time, one that he himself cannot even answer. Through  “The Saleman,” Farhadi explores the differences between a detached and a submerged understanding of socially-unacceptable or unlawful situations that affect those involved as well as their close relations.

The film “Divines” is a French-Qatari coming-of-age story directed by Uda Benyamina. The film’s story takes place in a rough neighborhood in the outskirts of Paris, and revolves around two teenage girls attempting to rise up, despite the life they were born into by working for a drug-dealer. The film stars Uda Benyamina’s little sister in real life, Oulaya Amamra. When asked about the filmmaking obstacles presented due to being an immigrant in France, Benyamina stated how she felt that the matter of her origins actually gave her more of a chance and opportunity than it hindered her. These circumstances were what shaped her work and motivated her. When Sam Asi pointed out the impressive fact that two of the five nominated filmmakers were female, Benyamina spoke of the stark male-dominance still heavily present in the film industry in both the U.S. and in France.