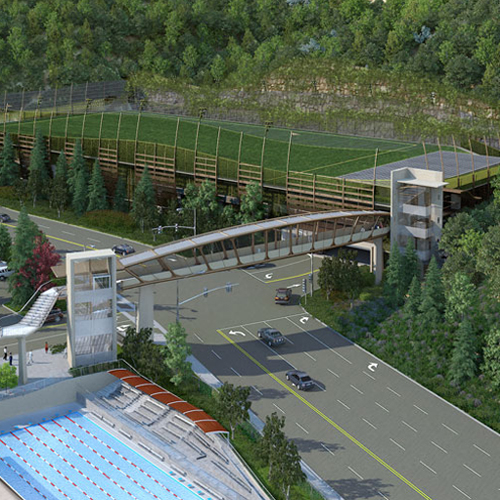 John Walker, president of the neighborhood council, announced a special meeting to discuss the plan at the CBS Studio Center at 6:30 p.m., with a presentation on the project beginning at 7 p.m.

“We have received a great many emails and letters from the surrounding neighborhoods about this project and now that we know the Draft Environmental Impact Report (DEIR) is going to be released on or about October 10, this will be the time when all the facts will be presented,” Walkersaid in a statement. “This Board will have had the opportunity to read the DEIR beforehand and the public can also read it upon release,” he added.

The Harvard-Westlake Parking Improvement Plan, which was proposed in April 2013, seeks to develop a three-story parking structure with 750 parking spaces and an athletic field on top of the structure that features artificial turf and will be fully lit. The proposed structure will be connected to the main campus via a 163-foot skybridge spanning Coldwater Canyon and have 87-foot-high retaining walls.

“What we’re trying to do is get cars off Coldwater because cars have traditionally parked on the east side of Coldwater between the school’s main entrance and Ventura Boulevard,” John Amato, vice president at Harvard-Westlake, told Canyon News. “This will get about 40 to 50 cars out of that area and, because we have a fairly significant bussing program, it will get those buses off the corners of the main driveway and into a parking area that we have control of south of the campus,” he added.

The new bridge and parking structure has the following objectives, according to the school’s page for the improvement plan:

A· Provide additional parking for its students, parents, faculty, staff and visitors

A· Eliminate off-site parking during the normal school day

A· Remove parking along Coldwater Canyon and improve traffic flow

A· Move bus parking from Coldwater Canyon to the campus

“The pedestrian bridge is including in the parking plan because what we don’t want to happen is for students, adults or whomever else using that to be running across Coldwater unprotected by being over the ground,” Amato said. Additionally, the plan will create new through lanes on Coldwater Canyon and add dedicated turn lanes into and out of the parking structure.

Amato said there has been both positive and negative community response for the parking plan and that Harvard-Westlake will be working with the not-so-happy group to mitigate and work with them to make this a win-win for everybody.

“We’ve been in the neighborhood since 1900 as Harvard and Harvard-Westlake as an all-boys school, a military school and now a co-ed school that has 10th, 11th and 12th graders on the campus,” he said. “We’ve changed over those 113 years and i think it’s been a good thing. What we need to do is work with the neighborhood and get through some of these issues,” he added.

Sarah Boyd, the vice president of Save Coldwater Canyon (SCC), told Canyon News the group was formed by residents in reaction to the Harvard-Westlake plan, which poses a threat to everything they stand for, especially with the land being undisturbed land.

“[We have] a broader mission to preserve and protect the scenic beauty, natural environment, health, safety and welfare of Coldwater Canyon and its neighboring communities,” Boyd said. “Because the HW parking project poses a significant threat to all these things, it is currently our primary concern,” she added.

Amato indicated that the new structure will be heavily landscaped to fit into the environment.

“While some have said [the area] is undisturbed land, it’s really not,” he said. “It has been the location of a couple houses, it has been flattened and had pads put down for development, which is how we purchased it, and, most recently, the DWP used it as a storage area for their equipment, tools and trucks,” he added.

Boyd said the SCC has gone to numerous neighborhood council meetings with the attempt to get other environmental groups to oppose the project.

“We have accumulated over 440 supporters in the past few months and are growing each week as more people find out about this project,” she said. “Valley residents all over, not just in Studio City, are concerned about the effects on the environment, native bird and mammal species, the intrusion into designated open space, and the potential traffic congestion from 2+ years of construction on Coldwater—resulting in a garage which would allow for hundreds more cars to come to the already congested commuting artery to park,” she added.

Alex Izbicki, a member of SCC and a resident of Coldwater Canyon, told Canyon News Harvard-Westlake contended that the parking plan was created because they needed more parking.

Amato said the current amount of 578 parking spaces cannot accommodate the demand of drivers for the school and the current field does not have enough space for football, lacrosse and other sports teams.

“We are a high school, grades 10-12, with parking needs that could not have been imagined when we first arrived in Studio City more than 75 years ago,” Amato said in a statement. “In recent years, we’ve seen a significant increase in full and part-time faculty to support our educational, athletic and performing arts programs. These programs, which are essential, have led to increased parking demands that cannot be met without the new project,” he added.

As the current DEIR stands, Boyd said they have several complaints and the report is riddled with contradictions and inadequacies.

“We believe there should not be two sets of rules in Los Angeles, those for Harvard-Westlake and those for everyone else,” she said. “This project demands so many exceptions to current laws and ordinances that are truly astounding. No neighbor or business that we can think of would be given a green light for a project with this much impact yet for which the developer has simply failed to provide convincing evidence of any need,” she added.

Councilman Paul Krekorian, the representative for Studio City, said he recommended a public comment period be extended so community members could weigh in.

“I have also insisted from the beginning that the developer take a thoughtful approach toward the project, listening to and respecting the concerns of nearby residents,” Krekorian said in a statement.

Following the presentation on the parking plan, there will be a Q&A session, with general comments limited to one minute depending on the number of stakeholders in attendance. Those attending on behalf of an organization will receive a maximum of 10 minutes speaking time.

“My hope is that this project will benefit everyone,” Amato said. “I think we will come to a good conclusion and that’s why I’m invested time-wise, not financially, but invested in the project and watching it unfold,” he added.