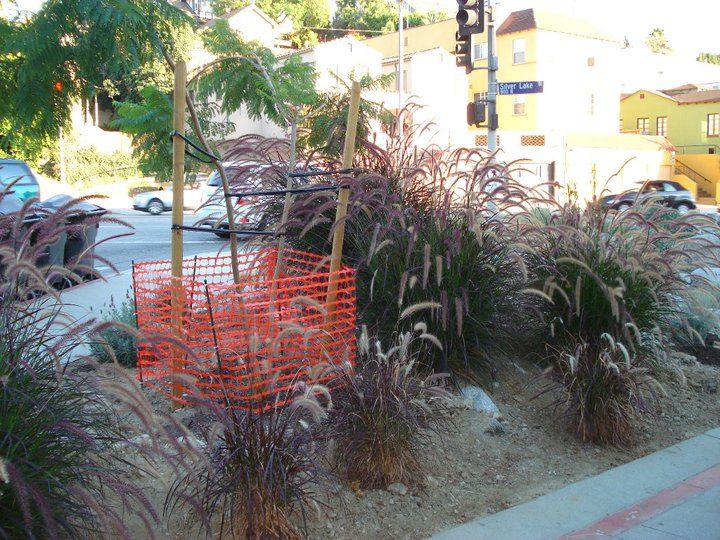 SILVERLAKE—After two years of planning, negotiation and a few months of construction, the Parkman Triangle is officially open.  Where once lay a vacant lot, a strip of hot concrete where trash was discarded irreverently and people parked illegally, there now sits a charming urban micro-garden.

Located at the intersection of Parkman Avenue and Silverlake Boulevard, the garden was a joint effort between LA’s Office Of Community Beautification and the Silver Lake Neighborhood Council.  The ribbon cutting ceremony took place during the afternoon of Saturday, August 14.  In attendance were around 40 people including City Councilman Eric Garcetti, whose participation has been instrumental in the realization of the garden.

Sponsors for the micro-garden include local businesses such as Aroma Restaurant, Cafe Tropical, Local Restaurant, Silverlake Flowers and others. Their contributions included donated funds and services and discounts for volunteers during the project.  Volunteers donated their time during the eight weekends of planting and landscaping and now the whole community will benefit from their hard work.  One Silverlake resident said of the project, “It’s great to get rid of any useless space like that- it shows how Silverlake really diversifies itself from the rest by turning something pointless and useless into something worth looking at.  I love parks and little meeting spots big cities usually offer”¦ to me, Silverlake is a mini SF or Brooklyn and so it really fits!”

The next step in the project is the continued maintenance of the park, which the Parkman Triangle Group hopes will be accomplished through the dedication of volunteers.  As stated on the group’s website, “We want to try to maintain Parkman Triangle as long as we can without hiring professionals to maintain it, but the City of LA will not spend funds on the upkeep of this park.  It is up to us!” The group plans to organize monthly events to take place at the garden on Sunday evenings.  The gatherings will allow community members to come together, socialize with neighbors, hear live music and give back by donating their time to the garden.