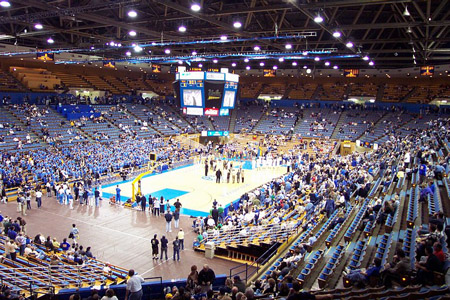 WESTWOOD—For athletes all over the world it is common knowledge that your home stadium, field, court, or whatever it may be is sacred ground. That is your home and when another team comes onto your turf it is your team’s job to protect it. Around the country there are many notable playing fields that are known for giving a major advantage to the home team. Florida has the Swamp, Duke has Cameron Stadium, and Ohio State has the Horseshoe, but none of them are as legendary as Pauley Pavilion.

On this court the Wizard of Westwood, John Wooden, magically lead his basketball teams to 10 National titles and a NCAA record 88 straight wins during his time as head coach, on this court Olympians for the 1984 put their talents on display for the world, on this court George W. Bush and Michael Dukakis held their presidential debate in 1988, and most importantly on this court lies the hard work and dedication of 39 national champions from basketball, volleyball and gymnastics. With all its history, it’s hard to believe Pauley Pavilion has only been open since 1965, but in that time numerous memories have been made and many lives have been changed by what went on in that building. In recent years a few famous sports landmarks, like the Old Yankee Stadium in New York or Cowboy Stadium in Dallas, have been torn down and built in a different location. Nothing is wrong with tearing down a sports stadium, but when a place that means so much to so many people ceases to exist it’s almost like a lot of great moments have just been erased. You can never go back to that field or stadium and say, I was here when Babe Ruth and all the pinstriped greats played, or I remember when Troy Aikman played his first game at Cowboy Stadium.

Pauley Pavilion almost falls into this same category, but fortunately for all the fans and former players the famous basketball court is only getting a little makeover. In May 2009 UCLA began fundraising for renovations of Pauley Pavilion, and a year to the date on May 11, the $136-million project finally got underway. Chancellor Gene Block along with Athletic Director Dan Guerrero, men’s basketball head coach Ben Howland, men’s football head coach Rick Neuheisel, NCAA basketball champions Mike Warren and Tyus Edney, Olympic champions Rafer Johnson and Peter Vidmar, and former chancellors Norm Abrams and Charles E. Young all took part in a ceremony to mark the beginning of a new Pauley Pavilion.

Student-Athlete Anna Li, a member of the gymnastic team that won the National Championship last month; Dan Guerrero; Matt Pauley, grandson of founder Edwin Pauley; and Vice-Chancellor of Student Affairs Janina Montero officially started the construction by using blue and gold shovels to turn over a small patch of dirt.

Besides all of the famous alumni and faculty that were in attendance, thousands of students filled the space on the east side of Pauley Pavilion that in about two years will be the foundation of the new court.

“The next chapter in the illustrious history of Pauley Pavilion begins today. If the building’s walls could talk they would tell the stories of thousands of students who over the last 45 years have gathered here during key moments in their UCLA experience – from freshman welcome and graduation, to intramural sports, Spring Sing and Bruin basketball, volleyball and gymnastics events. This project ensures that the legacy of Pauley Pavilion will live on in the 21st Century,” said Chancellor Gene Block.

The construction is estimated to be completed in the fall of 2012, and will include an all-new seating bowl, high-comfort, padded seats, new retractable seats, a digital scoreboard featuring HD video replay and enhanced sound system and a message ribbon board surrounding the area. Additional items include a new John and Nell Wooden, new locker and film rooms, and a new glass concourse at the entryway. All these upgrades will allow for UCLA to do even more with their arena than they already do and future students and student-athletes to experience Pauley Pavilion for generations to come.