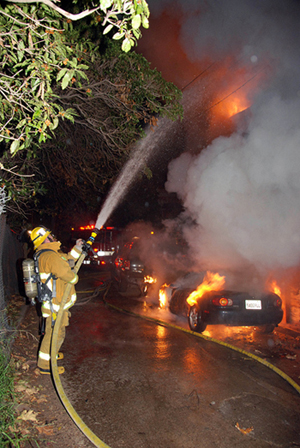 LOS ANGELES—A person of interest that was detained for questioning early Monday morning in connection with the 53 arson fires in the Los Angeles area over New Year’s weekend has been arrested.  A Monday evening news conference held at Los Angeles Fire Department Station 4 in L.A. revealed the suspect’s name as 24-year-old Harry Burkhart. Burkhart has been charged with arson of an uninhabited dwelling and is currently being held without bail.

According to the LAFD blog, Los Angeles County Sheriff’s Deputy Reserve Sheriff Shervin Lalezary of the West Hollywood Station stopped Burkhart who was the driver of a van near Sunset Blvd. and Fairfax Ave in L.A. about 3am. The van resembled a description provided by the multi-agency Arson Task Force as possibly being related to the recent fires and Burkhart resembled the person of interest seen in a videotape released by the Arson Task Force.  After detaining and interviewing Burkhart, investigators placed the POI under arrest.

The Arson Task Force, created after the first 17 fires took place in the West Hollywood and Hollywood areas, is comprised of the LAFD, the Los Angeles Police Department, LASD, the County of Los Angeles Fire Department, the District Attorney’s Office and the Federal Bureau of Alcohol, Tobacco, Firearms and Explosives.

In a statement posted on his official Facebook page just before the announcement of the POI’s arrest, L.A. Mayor Antonio Villaraigosa said he was “encouraged” by the detainment of the person of interest in Hollywood.  Villaraigosa also added that he was thankful no lives had been lost in the fires and only minor injuries have occurred to date.  One firefighter and one citizen have been injured over the course of the fires.

As of Monday, 43 fires have been set in the Los Angeles area, 9 in West Hollywood and 1 in Burbank.  While a majority of the fires have occurred in carports, others have been located near apartments or single family homes.  Vehicles and structures have sustained an estimated $2 million in damages.

This latest arrest brings the number of suspects apprehended in connection with the arson fires that began Friday, December 30 to 3. Two suspects were arrested on Friday, December 30 in Hollywood in unrelated incidents where four arson fires occurred and one was attempted.  According to the LAFD blog, 23-year-old Sun Valley resident Samuel Arrington was arrested for setting a dumpster fire at 1444 Poinsettia Place and a carport fire at 1434 Fuller Avenue where four vehicles and an apartment above sustained damage.  Arrington was charged with arson of an uninhabited dwelling and bail was set at $75,000.

Two other fires were also discovered, though not traced to Arrington.  One was where a fire was set in a parking lot trash can and another where an attempt was made to set fire to personal property at 7040 Sunset Boulevard.  All of these fires took place between the hours of 1:12am and 1:28am Friday morning.  The second arrest took place when a rubbish fire was discovered 4:29am at 1347 McCadden Place.  Fifty-year-old Alejandro Pineda was arrested on site for burning trash.  Pineda was booked on a charge of Arson of Property and bail was set at $50,000.

Although arrests have been made in the arson fires case, LAFD are asking the public to assist them.  Using the phrase, “If you see something, say something,” LAFD urges anyone who has information about this ongoing investigation or has witnessed suspicious activity to contact LAFD at (213) 893-9800 or LAPD at (213) 972-2971.  Those who witness a crime actively taking place should dial 911 immediately.