The LAPD reported a male driver who was driving a black 2001 Ford F150 truck was driving westbound on Wilshire Boulevard from Westlake Avenue. For an unknown reason, the driver drove on the sidewalk crashing into several street vendor stands and pedestrians, including two children, at the northeast corner of Alvarado Street and Wilshire Boulevard. 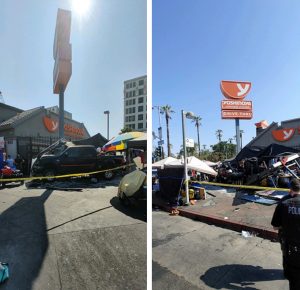 It was originally reported a firearm was pointed at the driver by an unknown male. After further interviews with the driver and witnesses no firearm was ever seen. The investigation revealed there were no signs of impairment or other related crimes.