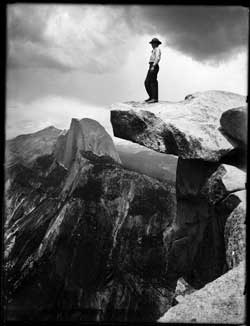 BEVERLY HILLS—The saga continues in the quest to once and for all determine if negatives found by Rick Norsigian over 10 years ago at a garage sale are those of iconic American photographer Ansel Adams. New claims from Adams’s Publishing Rights Trusts are denying Norsigian’s claims.

Rick Norsigian, a painter and construction worker from Fresno, who regularly hunts for antiques at garage sales, purchased the two boxes of negatives from the seller bargaining down the asking price from $75 to $45. The owner obtained the boxes from a warehouse salvage sale in the 1940s.

For over two years, Norsigian left the boxes under a pool table in his home. After four years and much research, Norsigian decided the negatives may be worth something after all and moved them to a bank vault.

On Tuesday, July 27, Norsigian’s story was front page news as his team held a press conference at David W. Streets’s Beverly Hills Art Gallery where Streets announced the collection of negatives to be worth over $200 million. However, Adams’s representatives have lashed out at both Streets and Norsigian as falsely hiking up the price of the negatives by driving the market to the negatives to their own benefit. Representatives from Adams’s camp have spoken out saying that even if the prints were authentic, they would not be worth much more than their historical value.

Norsigian, who has hired a team of experts to authenticate the negatives, claims that they are indeed the works of Adams, with a key identifier being the handwriting of Adams’s wife by two handwriting experts. However, Adams’s camp dispels the find, pointing to spelling errors on the negatives and inconsistencies in the handwriting, which would not have been made, as Virgina Adams grew up in the Yosemite area and knew it well.

The expert that Norsigian’s lawyer has hired to examine the photos, Arnold Peter, has also been called into question by Adams’s representatives on the grounds that Peter has not been known in the art world. The fact that the photos were left at a warehouse are also suspicious to Adams’s trust, as Adams was known to be meticulous with his negatives after losing many in a fire in 1937.

Matthew Adams, head of the Ansel Adams Gallery in San Francisco and Ansel Adams’s grandson, spoke with Canyon News regarding Norsigian’s claims: “This is not the first time he’s contacted us. He’s done so many times over a number of years.” When asked if he believes the prints in Norsigian’s possession are the work of his grandfather, Adams firmly believes “they are not the prints of Ansel Adams,” and their next steps include “reviewing legal options.” Adams also has other speculations regarding Norsigian’s prints, but would rather “do a little more research before making them public.”

In the last few days, other claims have been made regarding the photos. Miriam Walton, 87, from Oakland, Calif. is claiming the photos are not Adams’s, but the work of her uncle Earl.

Walton has since contacted art experts and was visited by fine art photography gallery owner Scott Nichols from San Francisco, who has studied the print owned by Walton and believes they could have been taken at the same time as the negatives that Norsigian has, as the shadows depicted in the picture are close to identical.

However, Arnold Peter believes the photos are Adams’s, and that the photo Walton has could have been picked up by relatives visiting Yosemite, where Adams sold prints early in his career, or perhaps it is a photo that Adams gave as a present.

Also on the list to emerge is “Pop Laval,” a Fresno based commercial photographer. Like Adams, Laval photographed mountains in the Yosemite area as well as the same San Francisco areas that Adams photographed. Laval’s son, Jerry, also interned for Adams. However, ledger records have since shown that the dates found on Norsigian’s plates do not match those of Laval, as he was at another site at the time.

At present, Norsigian plans to take the photos on tour at universities and museums, beginning with Fresno State University in October.