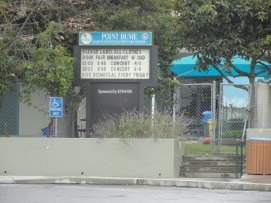 The Santa Monica-Malibu Unified School District board voted to deny charter status to PDMSS due to a board-prepared financial analysis that concluded PDMSS would be unable to sustain its planned budgetary outlays.  Board members expressed frustration at the lack of time to review the numbers more extensively.

At the time of the board decision, Canyon News interviewed a source within the Santa Monica-Malibu Unified School District who explained the rationale for the rejection of the petition.

“There were several areas that were a concern in the document that was presented.  For example, attendance projections were inflated, unrealistic, and the document didn’t describe recruitment adequately,” the source noted.  “The petition relies heavily on community support, depending almost entirely on donations.  Point Dume is small but affluent.”

The source acknowledged that fundraising was not a nonviable path, but disputed whether or not PDMSS could meet all budgetary commitments solely on the basis of community support.

Petitioners strongly objected to what they believed was an unfair financial assessment designed to prevent “domino” unemployment within the district.  Petitioners vowed to appeal to the Los Angeles County Office of Education (LACOE), a pledge which is now made manifest.

On Tuesday, January 18, the LACOE is scheduled to hear the appeals of PDMSS petitioners.  PDMSS charter advocate Ali Thonson provided insight into the charter push, saying, “One thing the county [Los Angeles] doesn’t have is the emotional attachment to the school itself,” she said. “I think it was really difficult, looking back at the school board members, how difficult of an emotional decision it was for them to make. I don’t think the county has that attachment. And something with the board was [that the charter petition] was really something completely new.”