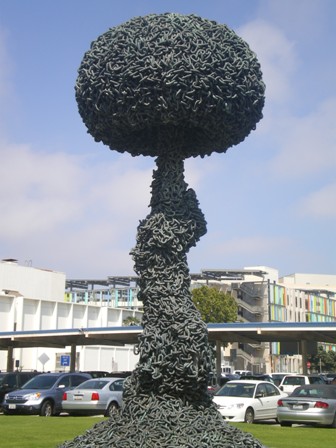 LOS ANGELES—Pulitzer Prize winning political cartoonist Paul Conrad died on September 4, at the age of 86 while at his home in Rancho Palos Verdes. Conrad won three Pulitzer prizes in editorial cartooning over a career spanning 50 plus years.

Conrad, who held the chief cartoonist position at the Los Angeles Times from 1964 to 1993, may be most well known for targeting President Nixon in his cartoons. Conrad was even listed on Nixon’s famed “enemies list,” a distinction that made Conrad proud.

One of Conrad’s more famous cartoons was published on August 9, 1974, the day of Nixon’s resignation. The cartoon featured Nixon’s helicopter flying away from the White House with the caption “One Flew Over the Cuckoo’s Nest.”

While Nixon may have been Conrad’s favorite target, no president was safe from his pen. Every president from Harry Truman forward, regardless of their political ties, was subjected to a Conrad cartoon.  One of Conrad’s final cartoons featured George W. Bush pushing a large boulder labeled Iraq up a mountain with the caption “Sisyphus”.

In 1991, Conrad created the sculpture “Chain Reaction,” which sits outside of the Santa Monica Civic Center. The sculpture is a 26-foot-high representation of a nuclear mushroom cloud constructed completely with metal linked chains. The caption that was written by Conrad, states: “CHAIN REACTION—This is a statement of peace, may it never become an epitaph.”