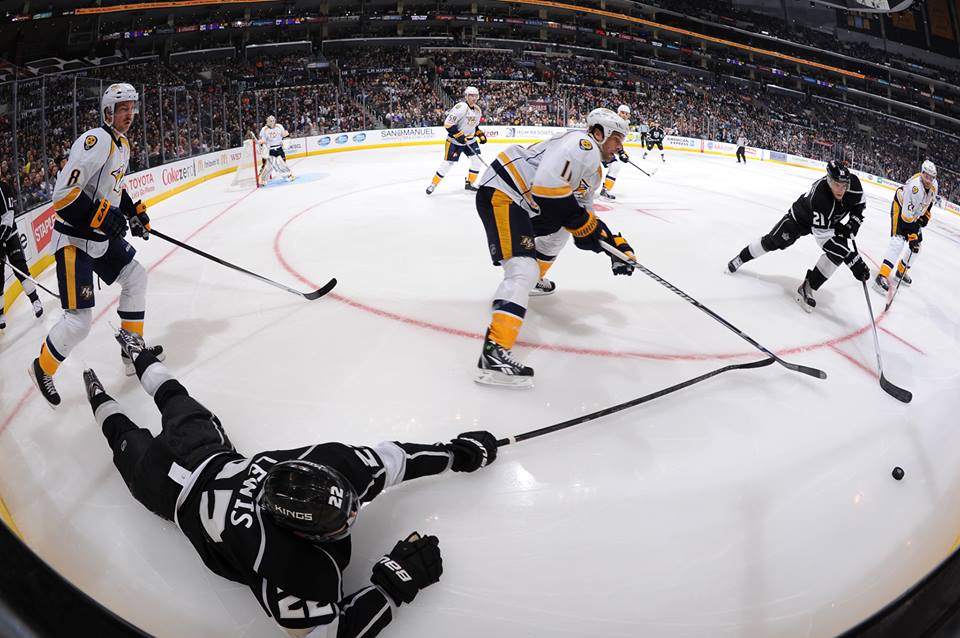 LOS ANGELES—The Kings late comeback in the latter part of regulation wasn’t enough to grasp the win. Down two goals through the first two periods, the Kings came back to tie the game, but faltered on David Legwand’s rebound shot to the Kings that sealed a 4-3 loss against the Nasvhille Predators.

The Kings began the game without team scoring leader Jeff Carter in the lineup, to an injury. Things turned violent between Daniel Carcillo and Roman Josi, as Carcillo was called for a kneeing penalty which Josi’s teammate Rich Clune did not take likely.

Carcillo and Clune each took fighting majors with the Nashville forward adding a game misconduct alongside.

Though Los Angeles won the fight, the same couldn’t be said for scoring the opening goal. It became a problem with Legwand opening a 1-0 lead midway through the first period with a snap shot through traffic on the power play to give him his third of the season. Nashville captain Shea Weber scored on their second chance on the man advantage with his fourth of the season.

Los Angeles didn’t stay quiet as their chance to cut Nashville’s lead in half came on an Anze Kopitar wrist shot with 37 seconds left in the period. The Kings took 14 shots against Carter Hutton playing in his fifth game with the Predators as second stringer for Pekka Rinne.

The Kings and Predators traded shots in the second period with Los Angelesgaining the upper hand. The puck possession did not fare well for them as Eric Nystrom returned the Predators to their two goal lead with a snapshot in front for his fourth.

The third period saw the Kings make their charge for control with Captain Dustin Brown tipping the puck in front of the net for his third making it a 3-2 score. Midway through the third period, a power play gave Mike Richards the extra man to score the tying goal that went past Hutton for a chance to take the lead. Their chance to gain the lead for the first time in regulation disappeared on the faceoff, as Nashville won the puck in the Kings zone. That led Mattias Ekholm’s rebound to find the stick of Legwand and break the tie that eventually led to the Kings to blowing a win before the long break.

The Kings sit at the bottom half of the Pacific Division not seeing action until Thursday before hosting Ryan Miller and the Buffalo Sabres. The Kings will see if a long rest could make or break the remaining games prior to a four game road trip through the month.