According to footage taken at the park, President Biden came to speak to a small crowd of bystanders when his shoe got caught in the clip on the pedal. He was already coming to a stop when he hit the pavement. His security detail followed the POTUS in golf carts to come his aid.

Biden recovered quickly and could be heard saying, “I’m good,” to onlookers. He was riding ahead of his wife Dr. Jill Bidden who was not with him at the time of the fall.

On June 8, following his appearance on Jimmy Kimmel Live, President Biden was seen catching himself from falling off the stairs of Air Force One as he was preparing to depart from Los Angeles. 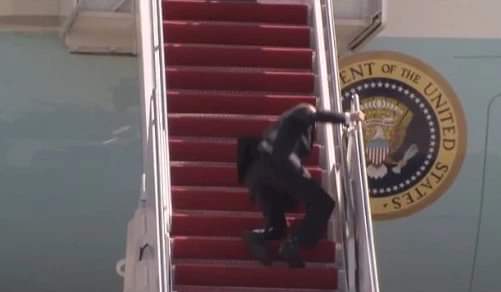 On Wednesday, May 11, the President was boarding Airforce One in Illinois after giving a speech on inflation. He spoke with the military personnel who were accompanying him to his plane. He tripped on the steep stairs of Airforce one. He made it to the top, turned, and saluted before boarding.

On March 19, 2021, Biden tripped up the stairs of Airforce One stumbling on the steps three times before making it to the top and turning to salute his constituents. The President of the United States was flying to Atlanta, Georgia to speak to the Asian-American community following several massage parlor murders.

Biden was 78 years old when he was elected into office, holding the title of the oldest sitting President. He will turn 80 on November 20, 2022.