According to The White House website, Payne was on his 14th deployment departing in a helicopter just after midnight after learning through intelligence that the terrorist had a massacre planned for the hostages. There were freshly dug graves.

Two buildings where the hostages were being held were heavily guarded by what President Trump referred to as, “Dozens of ruthless, bloodthirsty ISIS terrorist.” 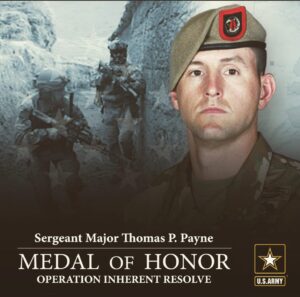 “He [Sgt. Major Payne] was in command of a team clearing one of the compounds. As soon as the ramp to his helicopter went down, ‘Pat’ rushed into a blistering hail of gunfire. Past and his team swiftly overpowered the enemy, secured the building, and freed 38 of the hostages. Then Pat received word that the rest of the assault team was facing harsh resistance in another complex. Pat turned to one of his fellow soldiers and said, ‘Let’s get into the fight.’ He saw the other building was on fire and he knew more of the hostages were still trapped inside.”

“Pat, you embody the righteous glory of American Valor. We stand in awe of your heroic, daring and gallant deeds,” President Trump stated. “Pat would be the first to remind us that he was not alone that day. In the battle, one Army Ranger made the ultimate sacrifice; Master Sergeant Josh Wheeler.”