According to a press release issued on December 20 by the U.S. Department of Housing and Urban Development (HUD), homelessness increased in California by 21,306 individuals (16.4 percent), accounting for more than the entire national increase.

The estimated number of persons experiencing long-term, chronic homelessness increased 8.5 percent between 2018 and 2019.  The increase was concentrated on the West Coast, with the largest increase in California.

The complete text of the HUD report can be found here.

Governor Newsom spoke to a crowd last week during Sacramento Town Hall meeting where he blamed President Trump for the state’s rise in homelessness. 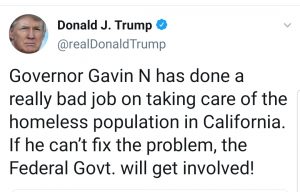 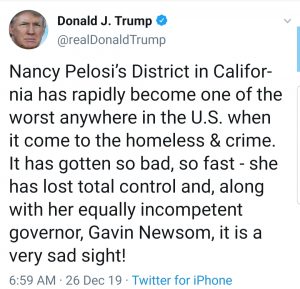 California’s homeless issue has been at the center of issues for Governor Newsom. In May, he promised funding for sheltering the homeless in the state.

He spoke about homelessness in regions with regulatory barriers calling California a poster child for the issue.

“The President is very passionate about doing something about the homeless crisis,” Carson said. He noted that the administration would work with the local government to address the problem.

Governor Newsom requested additional funding above and beyond the $1.75 billion reportedly in the budget to address California’s homelessness.