UNITED STATES−On Monday, October 5, President Trump returned to The White House at 6:30 p.m. after being released from Walter Reed Military Medical Center after being treated for COVID-19. The President traveled via the Presidential helicopter, Marine One.

President Trump disembarked Marine One on his own, walked across the White House lawn, and up the steps before removing his mask and saluting the marines who brought him home.

The President’s physician, Dr. Sean P. Connelly gave an update on the President’s health on Saturday, October 3. In his update, Dr. Connelly indicated that President Trump made substantial progress since first being diagnosed. Supplemental oxygen had been removed. President Trump’s O² levels had increased from a 96 to a 98. 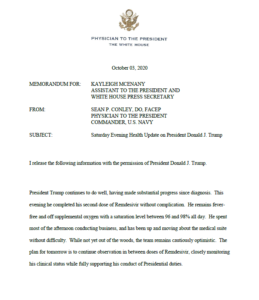 Once inside, President Trump gave a statement to the American about COVID-19 encouraging others that in order to get on top of the virus, don’t fear it. You can overcome it. President Trump indicated he was pretty bad when he was admitted to the hospital, however, he did feel great by Saturday.

The public outpouring of support for the President and First Lady who were both diagnosed with COVID-19 on Friday, October 2, has been incredible. Those who could go rallied in Washington D.C. with the #Walkaway campaign, prayer vigils, the Women’s Town Hall participants, MAGA Drag the Interstate riders, and motorcycle riders came out in great numbers with flags and signs of encouragement in tow. Some stayed in D.C. while others went out to the grounds of Walter Reed Military Medical Center in nearby Bethesda, Maryland.

One thing is for certain, the President was not lacking in moral support and well wishes, or prayers from the American people. As he disembarked the helicopter, one person could be heard shouting over the roar of the propellers. “How are you feeling?” he asked. President Trump gave a fist bump in the air and a thumbs up before continuing to the White House steps.