UNITED STATES—President Donald Trump signed a Veto to a Democrat-sponsored resolution that was an attempt to end the State of National Emergency.

“As President, the protection of the United States is my hardest duty. Yesterday, Congress passed a dangerous resolution that if signed into law would put countless Americans in very grave danger. The Democrat-sponsored resolution would terminate vital border security operations by revoking the National Emergency issued last month. It is definitely a National Emergency. Rarely have we had such a National Emergency. Therefore, to defend the safety and security of all Americans I will be signing and issuing a formal veto of this reckless resolution, and that’s what it was. I have to, in particular, thank the Republicans strong, wonderful people the Republican Senators that were on our side the side and on the side of border security. You were very brave yesterday, and I appreciate that very much.”

President Trump noted that there have been several times in American history that a State of Emergency has been declared, but Congress voted to revoke it to protect our own country.

U.S. Secretary of Homeland Security, Kristjen Nielsen spoke of the number of immigrants coming into our country stating: “We have not seen this type of flow.”

“I ask Congress to please pay attention. We’ve given you the facts. The system is breaking. Security is at risk and the very humanitarian protections that we hold dear in this country are at risk in terms of our ability being able to provide those for very vulnerable populations. Mr. President thank you always for your leadership and great support,” added Nielsen.

“Mr. President your declaration of emergency on the southern border was clearly authorized by the law and consistent with past Presidents,” said U.S. Attorney General Bill Barr.

“The crisis’ we are dealing with today are right on our doorstep and presents a real clear and present danger to the American people. So what you have done in a legal standpoint is solidly grounded in law,” said Barr in response to President Trump’s decision to sign a veto.

Vice President Pence said “I don’t know if I have ever been so proud to be standing next to your desk than I am today. I am standing with these courageous Americans and with these extraordinary Angel Parents.”

The resolution to end the National State of Emergency was Democrat-sponsored, but the following Republicans signed the ordinance: 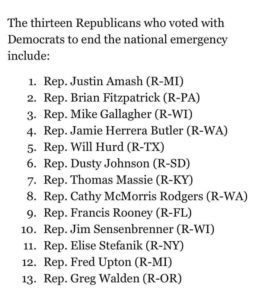