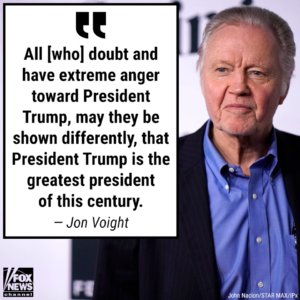 Jon Voight has been nominated for his capacity as an actor to portray complex characters. President Trump and Voight have a mutual respect for one another with Voight calling Trump, “the greatest President of this century.”

Alison Krauss has been chosen for making contributions to American music, blending bluegrass, folk, gospel, and country into a unique style. Krauss started talent contests at the age of 10 and first recorded music at the age of 14. winning contests for her talent at 10 years of age.

Sharon Percy Rockefeller is nominated for being a renowned champion of the arts, supporter of the charity, and a pioneer of new ideas and approaches in the field of public policy.

Musicians of the United States Military for personifying excellence in music and service to the country concert halls to warzones, and these patriots have inspired fellow Americans over generations with their courage and musical talent.

The Claremont Institute is being honored for championing the country’s founding principles and enriching American minds. Their publications and public events have impacted the understanding and appreciation of American freedom, democracy, justice, and rule of law.

Teresa Lozano Long is being honored for supporting the arts and improving educational opportunities, through scholarships and philanthropy. She helped America’s children and young adults learn skills needed to succeed.

Patrick J. O’Connell is honored for his skills in the culinary arena. As a chef at Through the Inn at Little Washington, he embraced regional flavors and championed local farmers. 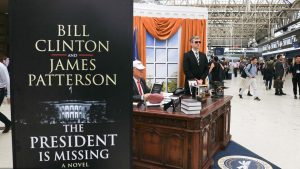 James Patterson is one of the most successful American authors. Patterson’s works has championed literacy in America. One of Patterson’s most recent successes was from the Alex Cross series.

The National Endowment for the Arts cited on its website that the award was designed by Robert Graham and is awarded by the President of the United States to individuals or groups who are deserving of special recognition by reason of their outstanding contribution to the excellence, growth, support, and availability of the arts in the United States.