WEST HOLLYWOOD ⁠— On Monday, June 8 President Trump’s star on the Hollywood Walk of Fame was vandalized. The actions come after weeks of protests and riots across the country. Several Twitter accounts recorded the progression of the act.

A woman can be seen writing “BLM” in gold marker next to the star. What began with obscene language and marker drawings turned into a complete black-out of the star. A doggy bag seems to have been smeared over the spray paint, with additional words on the side of the star.

This is not the first time the President’s star has been vandalized. In 2016, a man was arrested for taking a sledgehammer to the star. In September of 2018, the star was surrounded by wooden bars designed to look like a jail cell. That same year, another man took a pickax to the star and was arrested.

A Twitter User reported trying to clean the star, saying the situation was “overwhelming”.

In 2018, the WeHo City Council made a unanimous vote to remove the Trump Star on the Walk of Fame. According to the resolution, part of the reason was “his mistreatment of women” among other actions which had “not met the shared values of the City of West Hollywood, the region, state and country.” 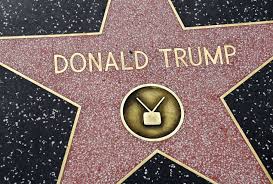 The resolution was then passed to Hollywood’s Chamber of Commerce, which said in various public statements the star would not be removed. The reasoning was that the Walk of Fame is a historical landmark. That means it is entitled to protection and preservation according to the West Hollywood Historic Preservation. The star has not yet been removed. As of June 10, the damages to the landmark have been fixed.

The Abbey To Require Proof Of Vaccination For Entry