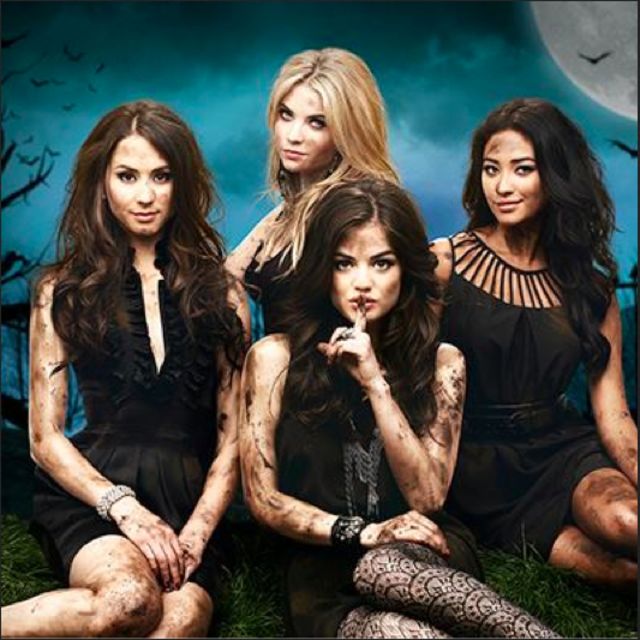 HOLLYWOOD—I can’t believe it’s been nearly 2 months since we’ve discussed television’s guilty pleasure “Pretty Little Liars.”  Keeping up with tradition, the series returned for its annual Halloween episode on Tuesday and did it deliver.  After nearly four seasons of speculating and guessing a huge bombshell was divulged to audiences in episode 13, “Grave New World,” as the liars discovered that Alison (Sasha Pieterse) is ALIVE! Take a moment to catch your breath as the reveal was worth the wait.

The episode opened with the liars dressed in their best Edwardian attire for a party at a cemetery. The ladies took shots at the costumes they wore, as Emily (Shay Mitchell) realized the sins of her past might come back to haunt her. Caleb (Tyler Blackburn) found himself on a near vacant bus heading towards Ravenswood.  Hanna (Ashley Benson) noticed two girls cloaked in red coats. Aria (Lucy Hale) did her best to keep Ezra (Ian Harding) from learning about her location, as he gave a coy warning that she should be careful. From a distance we saw Ezra watch his love, wearing the same costume that the liars feared from the summer finale. Okay, this might sound weird, but I have a feeling that Ezra might have a TWIN BROTHER. Remember, I called it first here.  If Ezra is indeed “A” he must have nefarious intentions up his sleeve.  Caleb became buddy, buddy with Miranda (Nicole Gale Anderson) who was also heading to Ravenswood.

Spencer (Troian Bellisario) speculated another guy dressed in the weird costume could potentially be the guy stalking their BFF. Mrs. Grunswald instilled a bit of fear into Emily, as she caught the ladies red handed at an uninvited event. Aria had a discussion with the lady cloaked in a white dress; she soon discovered the mysterious guy is related to the woman. The girls then initiated a chase with ‘red coat’/Ali who vanished into thin air, but soon discovered a mysterious passage way inside the cemetery. “Where does this go,” quipped Emily.  “Hell,” responded Aria. These girls sure know how to deliver some classic lines, just as a windstorm knocked out the power and Hanna went missing.

Hanna came across a message written in blood, “Help Me,” speculating that Alison was asking for her assistance. She escaped the dark dungeon to find herself inside an abandoned mansion with “A” close on her trail.  Caleb finally arrived in his new home “Ravenswood” looking for his girlfriend, but still smitten by Miranda who has a hold on him.  Hanna stumbled upon an old looking phone and decided to make a call, but not before she found herself locked inside, and staring face-to-face with some supernatural entities. New Ravenswood resident Miranda discovered her uncle’s home. Hanna found herself staring face-to-face with Alison, but not before “A” got his clutches on her. So could it be true, Alison is indeed alive?

Hanna met Miranda who attempted to assist the liar in finding the rest of her friends. The ladies stumbled upon a room full of caskets and it appears Miranda’s uncle works in the funeral business. Emily and Aria stumbled into a room that lead outside, but were unaware of the broken window with a shard of glass ready to slice the ladies in half, just as they continued to hear the voice of a woman who sound like Alison. Spencer found herself inside a garden and came face-to-face with “A.” She put up one hell of a fight, I must say.

Just when she attempted to unmask the culprit he knocked her out cold, and attempted to finish things with a pair of garden scissors, but Emily and Aria found their friend in a nic of time. The ladies searched the home for the cries of a woman and stumbled upon a recording, just as Mrs. Grunswald confronted the trio. Good one,“PLL” writers, you have a way of fooling the audience.

She revealed that the tape that was being played was stolen and she alerted the liars that, “One of them has been touched by the one that Alison fears the most.”  Exactly, what the hell did Mrs. Grunswald mean by that statement. Caleb and Hanna shared a heartfelt goodbye as she asked her lover to help Miranda find her uncle and then find his way back home. I hate to say it, but it was quite cliche, not many women would do such a thing. The liars were a bit surprised to see Ezra show up in Ravenswood to their rescue.

The episode concluded with the ladies spotting ‘red coat’ once again and a chase ensued that led the ladies to come face-to-face with the mysterious figure who was none other than Alison! Yes, the BFF that the ladies thought was dead was very much alive. So the bigger question is who is the person in Alison’s casket who was buried in season one? And what about that lady cloaked in all black who attended Detective Wilden’s funeral?

Alison revealed to her friends that’s its not safe for her to come home yet, she revealed all those hallucinations that the liars encountered during their time of despair were truly her coming to their rescue. The final moments culminated with the liars getting a clue from Alison that the person she fears could be Mr. Fitz. It wasn’t a coincidence that he showed up to deliver Aria her cell phone. He is looking for Alison, but she is one step ahead. Take deep breaths “Pretty Little Liars” fanatics, more answers are sure to come on January 7, 2014, when the second half of season four premieres!