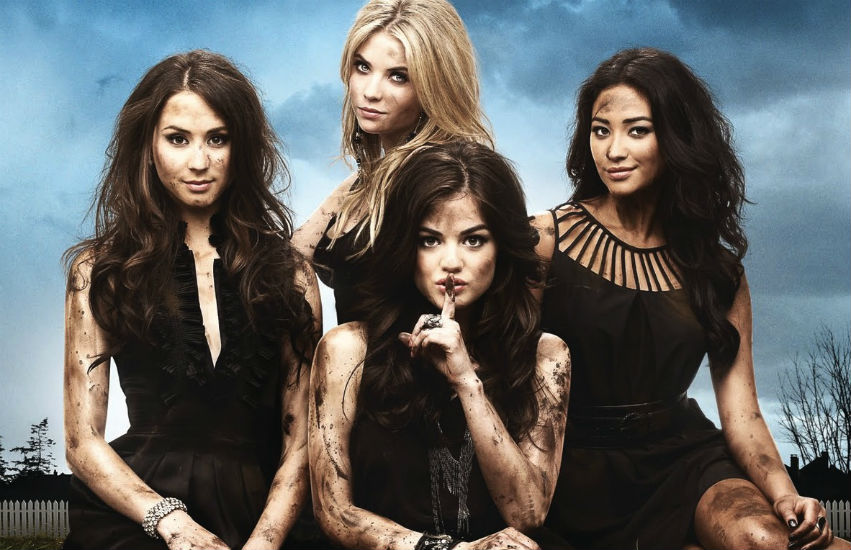 HOLLYWOOD—Everyone loves a great mystery especially when we’re left in the loop.  ABC Family’s new teen drama, “Pretty Little Liars,” is a guilty pleasure that had me hooked from the very first episode. The series revolves around four teens Aria (Lucy Hale), Spencer (Troian Bellisario), Hanna (Ashley Benson) and Emily (Shay Mitchell)—all estranged friends who are brought back together after one of their best friends, Alison (Sasha Pierterse), goes missing.

The mystery surrounding Alison is what keeps the viewer intrigued; you never know exactly what happened to Alison on that fateful night, but are the girls ever in for a shock when Alison’s body is found.  Now the fun begins because what turns out to be one secret slowly unravels as more and more secrets about Alison and her friends are unveiled.  Aria is secretly having a relationship with her English teacher, Emily is grappling with her sexuality as she tests the waters with the new girl in town Maya (Bianca Lawson), Spencer has to confront her jealousy issues with her older sister as well as her fiancÃ© who has eyes for her and Hanna deals with her tumultuous relationship with her mother Ashley (Laura Leighton) and her new status at school.

Alison is the ultimate mean girl, who comes across friendly, but you betray her and you’ll see her wrath. When Alison’s body is found the girls believe their secret has been buried with their best friend, but someone knows what they did and that someone could be anyone they know.  Perhaps it’s Detective Wilden who is getting closer to Hanna’s mother to get dirt on her, or Jenna who ultimately lost her sight because of a prank gone awry.

What’s so fascinating about “Pretty Little Liars” is the fact that each week the audience seems to become more engrossed in these girls’ lives and the secrets that they’re harboring.  You find yourself thinking how many secrets could they be keeping?  To make matters worse, “A” is threatening to reveal them, but it’s the way that this mystery person goes about taunting the teens that makes great television.  We’re made to believe that person is none other than Alison, but that can’t be if she’s dead right?  They go to great lengths to keep the teens on edge and let them know they’re always being watched so be careful what you do.

The adults are harboring a fair share of secrets as well.  Laura Leighton is terrific as the mother in crisis, who’s doing everything in her power to mend her relationship with her troubled daughter, but Ashley is hiding something you can sense it.  Fans will also be delighted to see the return of Holly Marie Combs as Ella who is unaware that her husband cheated on her and that her daughter knew and never told her.  The feeling of not being able to trust your own daughter to tell the truth has to be like a dagger in the heart.  The show has everything you could want: murder, mystery, cheating, lies, betrayals and so much more.  The teens come off a bit unapologetic about what they’ve done, so to a degree you want to see them punished.

Tuesday’s episode forced the girls to acknowledge “A” after that threatening lipstick message that was written on Spencer’s mirror. Spencer dealt with issues regarding her relationship with her father, while hiding the “secret” surrounding the essay she wrote.  Aria dealt with the repercussions of not telling her mother about her father’s affair, while her mother, Ella, confronted her two-timing husband played by Chad Lowe.  Hanna learned that Jenna is seeing a therapist, while Emily was forced to acknowledge her burgeoning relationship with Toby, Jenna’s brother.

Each of the main characters has distinct personalities that stand out and you can identify with.  We can all connect with the prospect of keeping a secret, but the thing about secrets is they always come to light.  It ultimately lies in having to deal with the consequences or actions that occur with every secret we keep; most of us aren’t ready to deal with that.   There’s a subtlety with the show where the secrets are revealed layer by layer and it keeps the suspense level high.  “Pretty Little Liars” teaches us to think twice before making that decision to keep a secret no matter how small or big it may be. The repercussions from that secret could create a ripple effect that can cause damage to more lives than just yours.  You wouldn’t want to be taunted, stalked or blackmailed by someone who knows your secret would you?  I’m more intrigued to see what the show has expected for season two because season one is incredible.

Over 300 Protestors, Rioters Arrested In Twin Cities Over Weekend