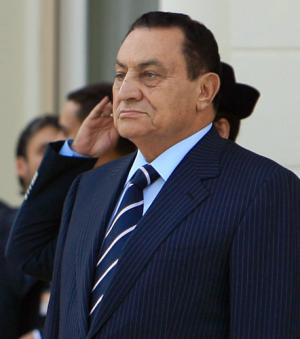 WESTWOOD—On Saturday, January 29, protesters gathered in front of the Federal Building on Wilshire Boulevard in response to the recent warfare in Egypt. Hundreds of people gathered at the event, which lasted for more than five hours, and demanded the resignation of President Hosni Mubarak.

A majority of the protesters were members of the Los Angeles chapter of ANSWER (Act Now to Stop War and End Racism).  The organization was formed shortly after the September 11 attacks and has been instrumental for individuals against the Iraq War.

Mubarak, who is 82, has been president of Egypt since 1981. The protests began on Tuesday, January 25, and have lasted for more than a week.  There have been daily demonstrations in the streets asking for Mubarak to resign. A vast majority of the protests are directly related to both political and social issues including high unemployment, low wages, lack of freedom of speech and free elections, economic conditions and corruption.  Demonstrations have escalated in violence. Supporters of Mubarak and his regime are clashing with those who are against Mubarak.

More than 300 hundred people have been killed, more than a 1,000 arrested and several thousand have been injured. Journalists have also been threatened while covering the recent protests.  CNN’s Anderson Cooper was caught in the melee; he and his crew were kicked and punched several times by protesters.

As a result of the violence, tourists had to leave the country immediately. According to a press release from the University of California spokesperson, Lynn Terriman, on Tuesday, February 1, 19 University of California students, a team of archeologists, faculty and parents were evacuated from Egypt when the U.S. state department issued a travel advisory for the country. They were taken to Barcelona, but are expected back in California later in the week.

“We are both happy and relieved that they have been delivered from what our overseas contacts described as an unstable situation,” said University ofCalifornia President Mark Yudof. “We have contingency plans in place for just these types of circumstances, and they worked.  I personally want to thank all of the UC Education Abroad (UCEAP) staff, the Risk Management Services unit at the UCOP and Risk Management staff on all the campuses; and also our partner IJET, our travel registry and security firm, which played a crucial role in this complex operation.  All of these people worked tirelessly to ensure the safety of our travelers.”

Thousands of protesters gathered in Cairo at the Tahrir Square on February 1, to continue to push for Mubarak to step down.  Mubarak addressed his nation later that day indicating that he would not run for presidency when his term ends in September, and he will not be leaving Egypt, which is fueling more outage from the nation.