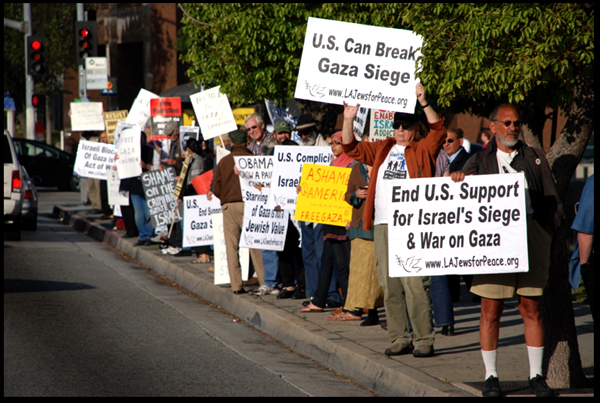 WESTWOOD—On Wednesday, June 2, hundreds of protesters gathered earlier this evening at the Federal Building on Wilshire and Veteran to protest the piracy of the Freedom Flotilla, which occurred this past Monday.

The Freedom flotilla is a civilian vessel that contains humanitarian aid to the Gaza blockade; however, on May 31, the pro-Palestinian protesters clashed with the Israeli government. This clash resulted in the death of at least nine passengers. To raise awareness, the organization, LA Jews for Peace organized a demonstration.

“It has been a long struggle, it takes years, policies do not change overnight, but this is a step forward,” Jeff Warner, Action Coordinator, of LA Jews for Peace stated in a telephone interview.

He said “that hundreds of people have gathered” together for the same cause.

The organization hopes to bring attention to the Obama Administration to condemn the attack and/or take other action when necessary.  In a statement that is posted on their official website lajewsforpeace.org/, both Warner and the organization states, “We also condemn the U.S. government’s full complicity in these crimes. Both the White House and Congress are fully supportive of Israel’s illegal siege of Gaza.”

Since the raid has occurred, it has sparked many protests all around the world.