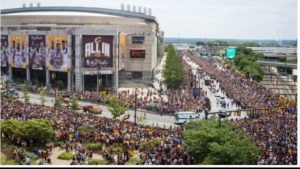 Lines started forming outside the convention center at 4:30 p.m. The rally started at 7:00 p.m.

Mayor of Minneapolis, Jacob Frey gained criticism from Minneapolis GOP Chair, Jennifer Carnahan for not permitting press from interviewing those attending the rally as they waited in the skyways.

“So this Mayor has completely abused the power of his office to play partisan politics,” Carnahan stated.

Mayor Frey previously wrote a letter to The White House requesting reimbursement to the city of Minneapolis from the Trump Administration for $530,000 expected costs to hosts the rally. Copies of the letter are available via social media. President Trump’s initial response was a threat to sue the city of Minneapolis.

The administrator of the Prince Estate later issued a complaint that the song, “Purple Rain” was played during the rally as she did not vote for President Trump.

Close to 20,000 supporters came to the rally including a large group from Women for Trump, and Cops for Trump sporting their new red, “Cops for Trump” shirts.

President Trump shook hands with officers who were forbidden by their Police Chief, Medaria Arrandondo and Mayor Jacob Frey to show up in their uniforms.

President Trump was interactive with the crowd, speaking of the strides made as POTUS, including a strong economy, and the unemployment rate reaching an all-time low. He also spoke at length about the impeachment inquiry.

News correspondent Matt Finn of FNC tweeted video footage of protestors from the hate group, Antifa, who built a fire and burned a Trump 2020 flag and red MAGA hats in the street. A policeman rode up on a horse and extinguished the flames.

Trump supporters were verbally attacked and punched in the back of the head by protestors. Pepper spray was used and mounted police helped to disperse the crowd. There has been no report of a total of arrest made during the event.

When Did This Become Okay?