UNITED STATES−A protest transpired at a campaign rally for presidential candidate Amy Klobuchar on Sunday, March 1. Klobuchar’s rally to begin Sunday night at the St. Louis Park High School, in her home town of Minnesota, when a group of protestors began to chant, “Free Myon,” while chanting from another group of, Black Lives Matter activists began another chant.

Footage obtained by Fox 9, shows a third group of Klobuchar supporters trying to offset the negative chants with their own pro-Klobuchar chants, before the protestors took the stage. 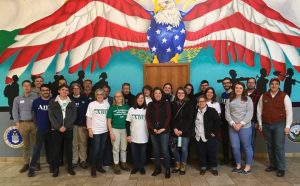 A Klobuchar campaign spokesperson told Fox 9 that “The campaign offered a meeting with the Senator if they would leave the stage after being on stage for more then an hour. After initially agreeing.” “They backed out. We are canceling the event.”

The protests were in response to the 2002 court case involving Myon Burrell who was imprisoned for the murder of Tyesha Edwards, 11, who was shot and killed by a stray bullet through the wall of her home while doing her homework.

Klobuchar, who was the Hennepin County Attorney at the time referenced the court case in her 2020 campaign .

Hennepin County Attorney, Mike Freeman had an issue with how Klobuchar handled the case. Freeman stated that Klobuchar who had already left office when Myon was sentenced to life calling for an end to the “politicization” of the Burrell case.

“Amy Klobuchar was not the trial attorney on the case. It should not be treated as a political football,” said Freeman in a statement. Burrell obtained an attorney to appeal the case, as he states he did not kill Edwards. Witnesses at the time stated that Burrell stood across the street and shot a gun toward the house.

According to reports, no weapon was found. When questioned about the gun, a gang member stated, “They got rid of it.” Burrell was 17 years old when he was sentenced.

Man Dies After Police Officer Kneels On His Neck