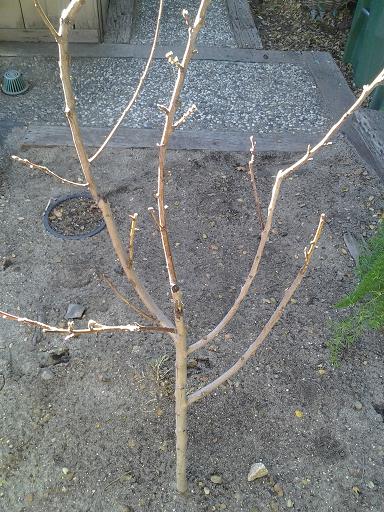 UNITED STATES—After centuries of breeding for abundant production of unnaturally large fruit, deciduous fruit trees have become dependent on specialized pruning while they are dormant through winter. Without pruning, most eventually become overgrown and overwhelmed by their own fruit. The weight of excessive fruit disfigures and breaks limbs. Pathogens proliferate within distressed foliage, crowded fruit and surplus fruit that falls to the ground.

Pruning not only improves the structural integrity of the limbs, but also limits the production and weight of the fruit that will be produced. Limiting production concentrates resources, so that there are fewer, but considerably better fruits, instead of too many inferior fruits. Concentrating the growth of the fewer new stems that develop in spring promotes vigorous growth that is more resistant to pathogens. Ideally, pruning also limits the height of fruit trees, so that much of the fruit develops closer to the ground.

Peaches, nectarines, apricots, plums, prunes, and cherries are all relates ‘stone’ fruits (of the genus Prunus), so require various degrees of similar pruning. Peach trees produce the heaviest fruit, so need the most aggressive pruning. Cherries trees produce significantly lighter and smaller fruit, so get pruned relatively minimally. Almonds (which are actually the ‘pits’ of a similar type of stone fruit) get shaken from their trees, so there is no advantage to keeping production close to the ground.

The ‘four Ds,’ which are ‘Dead, Dying, Diseased and Damaged’ stems should be pruned out first. Then the vigorous stems that grew last year should be thinned and cut back, but not removed completely. They are the stems that will bloom and develop fruit the following year. Pomme fruits, such as apples, pears and quinces, develop on similar newer stems that should likewise be pruned down, but many also develop on lower ‘spur’ stems that elongate so slowly that many spurs may never need to be pruned.

Most young deciduous fruit trees will need more pruning each year as they grow. Fortunately, pruning becomes more familiar with experience. Because pruning fruit trees is so specialized and important, it is worth studying more thoroughly.

The remarkably finely textured and dense foliage makes a nicely refined ground cover for confined spots, or fills in the spaces between stones in a wall or walkway. It gets only about an inch deep, with tiny and obscured stems that get no longer than four inches. Stems develop roots where they touch the ground to creep any farther. The tiny and narrow leaves do not get much longer than a quarter inch. Tiny white flowers that bloom late in spring may not get noticed. What distinguishes Scotch moss from richly deep green Irish moss is that it is instead yellow or almost chartreuse.