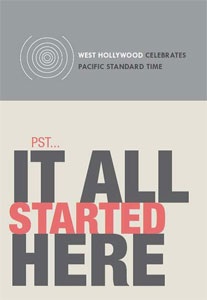 WEST HOLLYWOOD—The City of West Hollywood is celebrating being known for its creativity and progressiveness, representing a rebellious heart of artistic and cultural identity.

1945-1980 are the years that the event “PST [Pacific Standard Time]… It All Started Here” covers. West Hollywood presents its own special take on Pacific Standard Time with “PST”¦It All Started Here,” a collection of events and exhibits that brings art outside of the museum and takes it to the streets. This collective art gallery celebrates several art world icons, rock music stars, visionary conceptualizations as well as revolutionary thinkers who paved the way to make West Hollywood the renowned cultural attraction it is now.

“Brash, bold and brainy,” is just a few words the city uses to describe several of the art collections on display for the PST exhibit. The collection pieces include “Perpetual Conceptual” which is an exploration of the gallerist Eugenia Butler. This piece is a part of the seminal art movement on La Cienega Boulevard that was helped by the legendary Ferus Gallery. More information on this can be found at Nomadic Division, http://www.nomadicdivision.org/.

The next collective piece can be viewed on The Sunset Strip and is Mark di Suvero’s re-creation of his Monumental Artists’ Tower of Protest. The piece was built in 1966 as a part of the Vietnam War protest. It is now the focal point of many diverse events and performances. More information can be viewed at the LAXART website, laxart.org. This piece will open on January 19.

The last art collective piece is the Cruising the Archive: Queer Arts and Culture in Los Angeles in 1945-1980, a three-part exhibition that looks into the relationship between artistic practices and LGBTQ histories through artworks, objects and archival documents formed from the ONE National Gay and Lesbian Archives.  More information on this piece can be found by visiting the ONE National Gay Lesbian Archives at http://www.onearchives.org/.

According to the city’s website, the city incorporated in 1984 was the first in the U.S. to call itself “The Creative City.” The name was to showcase vibrant districts including The Avenue and Sunset Strip. West Hollywood was voted the second most “walkable” city in the community in California. At 19.9 sq miles, the city has more arts per square mile than any other city within the U.S.