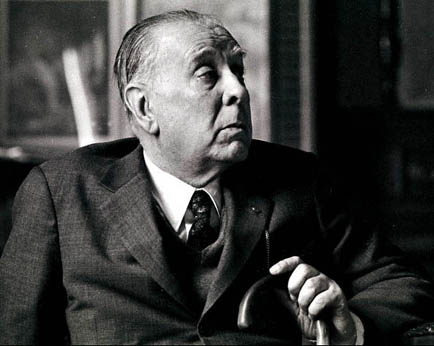 HOLLYWOOD—Days before stumbling upon the shockingly familiar words of Jorge Luis Borges’s poem “Moments,” attributed to another author, in a Tony Robbins’s self-help tome, I’d been crowing to a friend that in Borges’s undistinguished body of poems, there is the one poem that shines. “This is his great poem,” I enthused in a caffeine frenzy as we walked briskly up Fairfax. Tears came to my eyes as I recited its closing lines: “But already you see, I am eighty five/And I know I am dying.”

Now thanks to the passage quoted by Tony Robbins, I faced a wild contradiction. Who wrote “Moments”: the Argentinian man of letters, Borges, or an unknown Kentuckian named Nadine Stair? Thanks to the World Wide Web, the poem’s checkered genealogy was readily traceable. In prose form, it first appeared in Family Circle magazine, in English, in 1978. Borges’s “Instantes,” (translated, or rather, re-translated as “Moments”) appeared in a prestigious Mexican review in 1989, three years after Borges’s death. Semiotics professor Ivan Almeida traces the poem’s origins even further back to a writing by American cartoonist Don Herold in the October 1953 issue of Reader’s Digest.
Borges busted. You stinker, I thought. You were a plagiarist! And that was the dirtiest crime in the world, if you believe Mr. Arceneaux, my high school English teacher. Then again, how can you plagiarize a plagiarism? Borges exonerated.
A perusal of the Internet quickly revealed something even more curious that rocked my very perception of the poem. Borges did not pen it. That’s right. In none of his published books or manuscripts does “Moments” appear. Maria Kodama, his widow, denies that the blind Borges dictated the poem to her. In the wake of its rampant spread in the cultural bloodstream, Kodama has felt compelled to publicly repudiate both poem’s childish language and repentant tone that go against the “principles that Borges upheld to the end of his life.” She has described “the horror of universities reading and teaching it, always attributing this poem devoid of literary value to Borges.”
Who is the author of the celebrated poem? In his exhaustive study, Ivan Almeida traces the faux Borges to the Mexican cultural magazine, Plural. In May 1989, it was presented in a two-page spread with much introductory hoopla. Like a great con artist going in for the kill, the magazine laid on the superlatives with a trowel: “Bursting with masterly synthesis, it contains the most intimate thoughts of the author…”
Who wrote “Moments”? Finally, we are left with the enigmatic fingerprints of that great author, Anonymous, perhaps a wag on the staff of Plural who committed a literary counterfeit of the first order. He (or she) may have been moved by cynical joy, seeing how the unliterary masses sucked up the naÃ¯ve creation. No doubt, it has been the grand slam of literary hoaxes, eclipsing the Howard Hughes autobiography hoax for sheer scope and influence.
In the end, the Borges version has the melancholy final twist, lacking in the other versions, that catapults it and lodges it in our hearts. The anonymous hoaxer behind Borges’s moments adds to Stair’s words the stunning clincher: “But you already see, I am 85, and I know that I am dying.” It is at once sardonic, wistful and poignant. Meanwhile, the Stair version ends in a cheerful, “I’d pick more daisies.” It is really a leap of genius. Despite the protestations of Borges’s widow about it being without value, the apocryphal poem merges seamlessly with the biographical Borges. (At the age of 85 he had already been diagnosed with liver cancer.)  The reference to his impending death is so, well, Borgesian and moving.
My hat is off to Anonymous, sensitive and versed in Borges’s persona. Anonymous, who wrote the greatest Borges poem ever, to blazon t-shirts and decorate the walls behind secretaries’ desks. I must admit that I placed a crude xeroxed copy of the poem in my office desk drawer to read when inspiration was needed. Yes, I was duped.
Now that I have been disabused of Borges’s authorship, I would love to return to the innocence and purity of the day when all the chords in my heart were struck by the discovery of “Moments.” And I was commanded to swim more rivers and travel more and eat more ice cream, by no less a commander than Borges himself. I answer now as I did then, with a rousing, “Yes sir!”