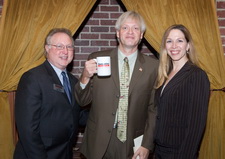 SHERMAN OAKS—There will be a business luncheon on Thursday, January 19 at 11:45 a.m. The event will be held at the Sportsmen’s Lodge on 12833 Ventura Boulevard. The event’s special guest speaker will be Talk Radio Show host and Daily News Columnist Doug McIntyre.

McIntyre is the host as of January 3, 2012 of the “McIntyre in the Morning” Talk Radio 790 KABC from 5a.m. to 9a.m. in Los Angeles. He has also written for major TV Networks with his time spent as a television/screen writer and producer for such hit TV series as “Married With Children,” “WKRP in Cincinnati,” “Mike Hammer—Private Eye,” “Full House” and the PBS Kids series, “Liberty Kids.” McIntyre was nominated for the Humanitas Prize for his talents in television writing. McIntyre decided to move to the morning show due to his successful efforts as host of KABC’s hit overnight show, “Red Eye Radio.”

He was also ranked one of the “Top 40” radio host by Talkers Magazine. McIntyre has made several TV appearances on shows such as Bill Maher’s “Politically Incorrect,” “Real Time on HBO,” The History Channel, the FOX News Channel and O’Reily Factor.

In his time as a published author he has written for American History Illustrated, LA Jazz Scene, the LA Times and many others. His own book, Cheap Advice, has been published by Time/Warner Books in 1995. In 2010 he was named, “Best Columnist” by the California Newspapers Publishers Association. He is currently the Page One Columnist for the Los Angeles Daily News. The column appears every Wednesday and Sunday.

The Sherman Oaks business luncheon is sponsored by Chamber President Dr. Robert Cohen, DDS, and Dr. Neal Stuart Miller, Studio City Oriental Medicine Center; to RSVP with the Chamber Office contact (818) 906-191. There will be lunches served for $30 for members with pre-paid reservations and $45 for all non-members.