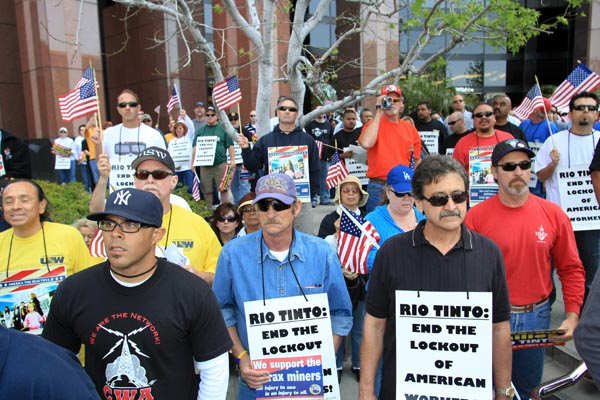 LOS ANGELES—An estimated 1,000 union workers and labor activists joined together and picketed in front of the British consulate in Los Angeles on Friday, April 16, urging government officials to end the lockout of miners in the Mojave Desert.

According to the Los Angeles County Federation of Labor, AFL-CIO, the demonstration lasted for more than one hour outside the consulate offices on Wilshire Boulevard. The decision to rally was decided after government officials said they couldn’t do anything to help the miners were that locked out at Rio Tinto’s borax mine in Boron.

In a prepared statement, Kevin Martz, who operates the mine’s heavy equipment said, “We’re converging the British consulate because Rio Tinto is a British-based global mining goliath that’s trying to starve our families and community.”

Caroline O’Connor, the organization’s Communications Director, told Canyon News that many different union-activist groups were involved in support of the demonstration, including Teamsters big rigs, iron workers and teachers.

“100 miners and their families caravanned to the rally,” said O’Connor.

O’Connor also stated that Executive Secretary-Treasurer Maria Elena Durazo met with British consulate officials a few days before the rally to find a solution to the lockout.

“Officials said there was nothing they could do, as it was a ”˜business issue,’” said O’Connor.

“This is much more than a tea party,” said Martz. “British companies aren’t welcomed when they disrespect American families and communities.”

A UK-based corporation, Rio Tinto operates California’s largest open pit mine in Boron, about 100 miles northeast of Los Angeles. The company decided to lockout more than 500 miners after negotiations were refused.

In a news release from Rio Tinto, Susan Keefe said, “This decision could have been avoided if union leaders would have engaged in meaningful negotiations over the past five months, or agreed to seriously consider a company offer made on Thursday, January 28, which stipulated that employees would be locked out if they did not ratify the company’s offer by Sunday, January 31. Although a union rally was held on Saturday, January 30, the offer was not presented to members for a formal vote.”