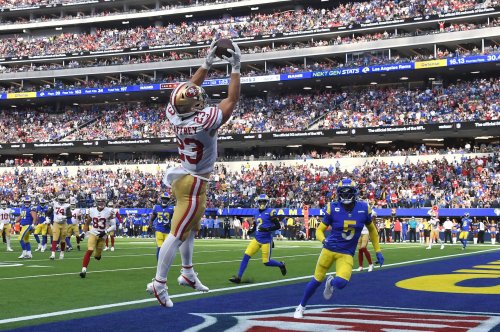 INGLEWOOD—Christian McCaffrey and the San Francisco 49ers ran wild against the Los Angeles Rams on Sunday, October 30 at SoFi Stadium with a 31-14 victory in a stadium filled with Niners fans. San Francisco dominated the Rams the last four seasons, falling below .500 at a mark of (3-4), the Rams offensive woes continue failing to score more than 14 points in four straight games. Their season is in danger of spiraling.

Reigning Offensive Player of the Year, Wide Receiver Cooper Kupp suffered an ankle injury with less than 2 minutes remaining in the game. Kupp was rolled up on after a third down catch, remaining down on the field for several minutes.

Rams Head Coach Sean McVay’s decision to keep Kupp in the game has come under fire from everyone, including McVay himself.

“That’s why you wanted to try to be smart getting out of the game, and I’m kicking myself for not running the football again,” said McVay.

Since the status of Kupp is uncertain, it is unknown whether the Rams will be without the man who accounts for more than 32 percent of the team’s total offense for at least a few weeks. In 2022, the Rams are one dimensional, desperately gasping for air in the running game, where the defending Super Bowl champs managed only 56 yards on the ground.

Newly acquired Running Back Christian McCaffrey was sensational, becoming the first player since 2005 to throw, run and catch a touchdown in the same game. McCaffrey had 149 yards from scrimmage including a 34-yard perfect spiral to Wide Receiver Brandon Aiyuk.

Although the Rams responded with a Matthew Stafford 16-yard touchdown pass to Cooper Kupp, taking a narrow 14- 10 lead into the locker room at halftime.

The 49ers came out with a chip on their shoulder in the second half, scoring 24 unanswered points in the satisfying victory. San Francisco Quarterback Jimmy Garoppolo threw a 9-yard TD Pass as McCaffrey leaped into the air, coming down with the dazzling catch in the blue end zone.

SF’s Garoppolo threw for two touchdowns, passing for 235 yards while going 21 of 25. It was the 49ers 8th consecutive regular season victory over the Los Angeles Rams. Clearly, the addition of Christian McCaffrey makes the 49ers an instant Super Bowl contender.

If any team can relate to the struggles of the Los Angeles Rams, it is their week 9 opponent the Tampa Bay Buccaneers. Last year, the Rams defeated Tom Brady and the Buccaneers 30-27 in the playoffs; with kickoff set at 1:25 p.m.