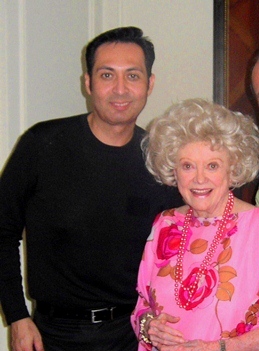 BEVERLY HILLS—Bravo’s new hit series “The Real Housewives of Beverly Hills” has a cast that I finally can fully understand. The “D.C. Housewives” were shrill, argumentative and attention grabbing, the “New Jersey” and “Atlanta Housewives” seemed domineering, demeaning of others and most of all, desperate. However, knowing each and every lady from “Beverly Hills,” I am thoroughly enjoying the new show. Evidently a lot of other TV viewers are as well, since word came this week from my friend Bernie Guzman, that the show has been renewed for up to three seasons already.

Bernie is the celebrity chef to the stars, and on this show he works for Adrienne, who is from the famed Maloof family, of the Palms Casinos in Las Vegas. Adrienne’s mother is Irish, her father is Lebanese. The beautiful housewife, who is our neighbor, loves to eat healthy food, but her Irish mother offers her daughter’s chef all the family recipes to keep Adrienne healthy and happy for the series. “Each time I go to work for a celebrity, I try to cater the meals to their tastes. Whatever they want, I am willing to learn,” said Bernie. The famous chef to the stars has over a thousand cookbooks in his home. He had to redo his kitchen pantry to add shelves for the various cookbooks he owns. “I love cooking every type of food. Tommy, from Indian, to Mexican and even soul food, I’ve learned to do it all,” said the chef.

Though my friend Phyllis Diller speaks highly of Bernie, so would many of the famous celebrities he’s worked for. From Will and Jada Smith, Drew Barrymore, Glenn Frey and even Mary J. Blige, Bernie has handled the taste buds of all. “Mary J. was not the diva you’d think Tommy. I never will forget, she’d be at home or at the Marvin Gaye Studios where she’d be working when I was cooking for her, and she’d be so down to earth and nice. Wearing sweats and T-shirts. Then she’d put on her makeup and get ready to perform and you’d know she was a star,” said Guzman.

When asked how he’s able to keep such high-maintenance stars happy with his cooking. Bernie replied, “The first thing I do when I go to work for anyone is to ask, what are your allergies to certain foods, what are your tastes and interests and I usually talk to the star’s mom, which worked great when I worked for Will Smith. I’d worked over two years for his mom, so she taught me how to make soul food, when my time came to take care of Will and Jada, who were awesome to work for, I knew all of Will’s favorite dishes.”

Bernie also enjoyed cooking for Miss Universe, who was formerly Miss Thailand. “Her mom owned a Tai restaurant back in Thailand, then she wanted to start a Mexican restaurant, so from my own heritage, I was able to give her pointers,” joked Guzman. “I grew up with a working mom, we were called Latchkey kids back then. My mom by the time I was 5 taught me how to make meals for myself, since she was not always home. That’s how it all started.”

Now solidly set in the home of Adrienne Maloof and her husband Dr. Paul Nassif, who practices medicine in Beverly Hills as well. Bernie is happy to report, “Adrienne is a great boss, with a lot of class and I know you enjoy her on the show, Tommy. You know that she is a great lady, just like her beautiful mother.” When pressed for some of the top secrets of the show. Bernie laughed and concluded, “You’ll just have to watch the show. I get in at 6 a.m. to start making breakfast for the family and at 8 p.m. when shooting is still going on, I’m still there. But this has been a great experience and I’m happy the show is doing so well.”

“The Real Housewives of Beverly Hills” airs Thursday nights on Bravo at 10 p.m.