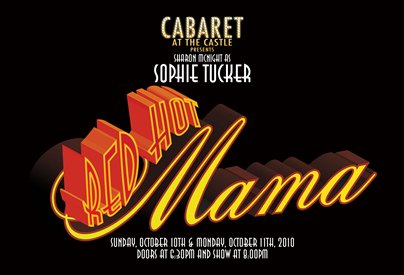 Once was never enough for the audiences of those cities and return, extended engagements were the order of the day. Never satisfied with limiting Sophie to cabarets. Sharon continued to develop the script and include additional songs resulting in a full theater piece and named, “Red Hot Mama.” As a theater piece, the show opened at the Denver Center for the Performing Arts and was originally booked for three months. The show was extended and ran for an additional three months. Sharon’s ultimate dream was to take “Red Hot Mama” off-Broadway and in 2002 that dream became reality when the New York Theater Company presented the show at the Lexington Avenue Theater. Today there are three editions of the “Sophie Tucker Show”: the original “Sophie Tucker Songbook,” “Red Hot Mama” for theatre, and highlights of the off-Broadway hit “Red Hot Mama” (an abbreviated version). All three shows are touring in cabarets, theaters and concert halls across America.
WHEN: Sunday, October 10 and Monday, October 11 – Show 8 p.m.