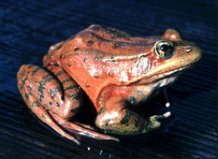 MALIBU – Federal biologists were surprised to find 500 red-legged eggs in a San Fernando Valley stream. After discovering the eggs, they were transported from the Upper Los Virgenes Canyon Open Space Preserve to the Santa Monica Mountains.

Federal biologist are now moving the eggs of these threatened species to wetlands 10 miles away from the Santa Monica Mountains, which have been carefully selected to give the eggs a chance to survive. The eggs have been re-located to these wetlands to expand the population. Once hatched, the tadpoles (under the lead of Katy Delaney) will be moved to historic haunts that are free of predatory snails, fish and crayfish, that could tear the tadpoles apart.

According to the National Park Service, the U.S. Geological Survey, the U.S. Fish and Wildlife Service and the Mountains Recreation and Conservation Authority indicate many red-legged frog eggs have not been around since the 1960s. The population of these amphibians first started to decrease due to fires, mudslides, pesticides, loss habitats, being hunted and contracting skin fungus.