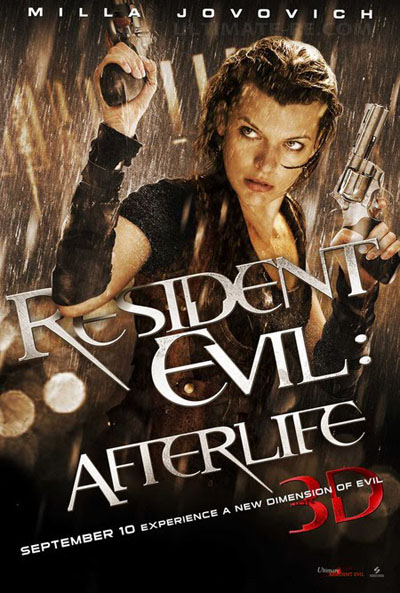 HOLLYWOOD—Horror seems to be the theme for the past couple of weeks. The Paul W.S. Anderson thriller, “Resident Evil: Afterlife,” is filled with a lot of great stars and exciting and intense action. The film lacks a cohesive story that moviegoers can follow, but still packs a suspenseful punch as far as horror goes.

The studio’s synopsis says, “In a world ravaged by a virus infection, turning its victims into the Undead, Alice (Jovovich), continues on her journey to find survivors and lead them to safety. Her deadly battle with the Umbrella Corporation reaches new heights, but Alice gets some unexpected help from an old friend. A new lead that promises a safe haven from the Undead takes them to Los Angeles.”

Who knew that in the final battle for survival, that the land of Angels would be where hope lies? The action sequences in the film that show the thousands of undead, make the viewer jump with surprise. This installment is even scarier than all previous ones. Anderson both wrote and directed this film, which is probably not a great choice. The story was not well written, but the pace of the film was fine, except it lasted 10 minutes too long in my opinion. I suspect that there are several scenes that should have been cut, which would have shortened the film into a perfect 70-minute film.

Stars Milla Jovovich, Wentworth Miller, Kim Coates and Ali Larter carry this film. They each become very physically involved with the story, which is not a film where the characters are just reacting. Due to frightening events in the story, they are all a part of the action. In this film especially, Alice’s battle with the Umbrella Corporation reaches a fever pitch. There are times when you don’t know if Alice and the other good guys will come out on the other side of the story intact.

“Resident Evil: Afterlife” is a scary but fun film for horror buffs to see for the end of summer movie season. Miller makes a giant leap in his acting from “Prison Break,” and Jovovich steals the picture—but she is supposed to do that. This reviewer gives the film Three of Five Stars.