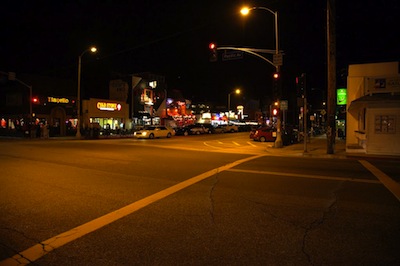 SANTA MONICA—Detectives are seeking the public’s help in investigating the stabbing death of a young man in the streets of Venice around midnight on Monday, November 18.

At approximately 12:15 a.m., a resident waved down Pacific patrol officers after discovering a man lying dead in the middle of Pacific Avenue andWashington Boulevard. According to police, the man appeared to have sustained stab wounds to the chest.

The Los Angeles Fire Department paramedics transported the victim, identified as 24-year-old Guillermo Perez, to UCLA Westwood Medical Center where he was later pronounced dead from his injuries.

Perez was a local resident who worked as a cook at two Venice restaurants to support his family. Co-workers of Perez at the Mercedes Grill, located less than a block away from the crime scene, reportedly told police that Perez finished his shift only 20 minutes before police learned of the fatal stabbing.

Los Angeles Police Department West Bureau Homicide Detectives are asking for assistance from community members and nearby businesses for any clues, surveillance footage or information that may lead to an arrest of possible suspect(s) responsible for the murder of Guillermo Perez.

A server who worked with Perez told the Canyon News the Mercedes Grill and BIN73 would be holding a silent auction fundraiser for his widow and 1-year-old baby on Monday, November 25 at 7 p.m. Local businesses in Marina Del Rey have donated tons of generous gifts, such as gift cards and massages valued at $150 from the Ritz Carlton, and community members are urged to donate money or services to be sold at the auction as well. All proceeds from food and drinks ordered at Mercedes Grill that night will also be going to the Perez family to help pay for the funeral.

Perez, known fondly as “Memo,” was described by his co-worker as a “young, good kid always smiling” and a “hard-worker.” “That’s one thing we all remember about him, he was always smiling,” the co-worker added.

Anyone with information related to the stabbing incident is asked to contact the LAPD West Bureau Homicide Detectives Dave Vinton or George Bowens at (213) 382-9470. Anyone wishing to remain anonymous should call Crime Stoppers at 1-800-222-TIPS (800-222-8477). Tipsters may also contact Crime Stoppers by texting to phone number 274637 (C-R-I-M-E-S on most keypads) with a cell phone.  All text messages should begin with the letters “LAPD.”  Tipsters may also go to LAPDOnline.org, click on “webtips” and follow the prompts.