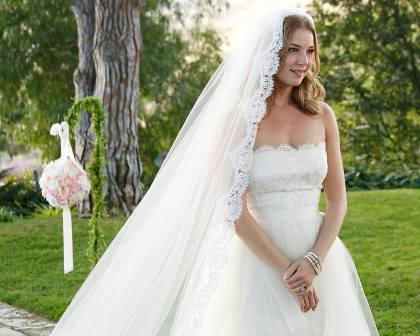 HOLLYWOOD—It was the moment that audiences have been eagerly waiting for since the start of season three of “Revenge.” Just who shot Emily Thorne (Emily VanCamp)? That answer was revealed to audiences Sunday night, during the mid-season finale and surprise it was none other than Daniel (Joshua Bowman)! I must say I didn’t expect him as a suspect, but it sets up an interesting string of events for the coming season.

The episode opened with Emily, Nolan (Gabriel Mann) and Aiden (Barry Sloane) discussing ways to get Victoria (Madeleine Stowe) to the big wedding. Emily, however, was not too concerned as she had other plans. Conrad (Henry Czerny) and Lydia (Amber Valletta) continued to play house, just as Lydia choose to take steps to bring down Ms. Thorne. It was a wise decision for Emily to put the bug in Conrad’s ear to bring Patrick (Justin Hartley) back to The Hamptons to get Victoria to the wedding.

Looks like Daniel is still having doubts about his wedding as he decided to go into work on the big day, just as Sara stopped by to remind him of her new endeavors, but I have an inkling that she is after Daniel still. Patrick’s return elated Victoria in a way that none of her other children does. But it appears Conrad, Patrick and Victoria have unfinished business, and Victoria made threats that had me a bit concerned.

The glimpse given to the audience of the ‘death’ of Emily Thorne was quite exciting, and carefully choreographed, but every plan always has a flaw. Jack (Nick Wechsler) shared a bittersweet goodbye with Emily; it was obvious that both still have strong feelings for one another. Patrick made a trip to Nolan’s house to rekindle their romance, and shattered Nolan’s heart in the process.

Unfortunately, for Emily, Lydia presented the evidence that gave her the ‘invitation’ back into the elite of the socialites, but will it last. Whoa, it seems like eons, but Emily finally said “I Love You,” to Charlotte (Christa B. Allen). It almost feels like Emily is foreshadowing something bad happening on her big day. She shared a passionate kiss with Aiden, as she warned him of a minor problem involving Lydia. Emily’s big wedding day was a success, besides the minor misstep involving Lydia trying to crash the shindig. Emily and Daniel shared an awkward first dance, but Nolan stepped in to save the day; these two are indeed friends for life.  It was a tearjerker moment to say the least.

Margaux (Karine Vanasse) was none too pleased with Conrad questioning her motives. Well, well ,Daniel went through with the wedding, but was secretly thinking about his former flame Sara, just as Emily admitted to Daniel she was well aware of his intent, even through all the fake smiles. It all seemed more like a publicity stunt versus a wedding. Victoria hit the nail right on the coffin, as it was obvious that Daniel was using booze to masquerade his true feeling.  The Grayson clan was none too pleased with the announcement thatLydia would be onboard for the yacht to celebrate the festivities. I have a feeling that Lydia may actually meet her demise once and for all.

Jack was a bit dazed with the news from Sara that she was secretly longing for a relationship with Daniel, as he is seeking one for Emily. Nolan’s text worked as it got Patrick to reveal his involvement in Father Paul’s death and the duo shared a kiss. Emily unveiled a video homage to celebrate past happy moments. Lydia spotted the happy bride, leaving the deck, just as Danny received bad news that Sara tried to kill herself. Lydia decided to present evidence to Victoria on Emily to bring down our heroine, but it looks like Aiden might have bigger plans for both ladies.

Victoria confronted Emily about her true identity.  The two ladies traded spars, finally a confrontation that the audience has been waiting for, but the surprise came when Daniel grabbed the gun and in a drunken rage shot Emily who spilled overboard, launching the gun in the water.  This does not bode good news at all.  It was none too pleasing to watch the chaos unfold as Emily and Victoria were both missing. Nolan and Patrick’s love affair was halted when Patrick discovered Nolan’s secret lair.

Jack and Aiden soon discovered Emily’s bloodied wedding dress, but no body, which sent the gentlemen in a frenzy. It was indeed one of the best moments of the series since the season one finale.  Enjoy the holidays everyone as “Revenge” doesn’t return to the canvas until January 5. Begin transpiring where the series will go with Victoria knowing Emily’s deception, Danny living with the guilt of attempted murder and the ones who love Emily most seeking vengeance!